Written by Benigni A.
Category: Physiology and Physiopathology

Angiotensin II (AngII), the central product of renin-angiotensin system (RAS), has a role in the etiology of hypertension and in pathophysiology of cardiac and renal diseases in humans (1). Other functions of AngII include effects on immune response, inflammation, cell growth and proliferation (2), which are largely mediated by AT1 receptors. Here, we show that targeted disruption of the Agtr1a gene encoding AngII type 1A receptor (AT1A) in mice translates into marked prolongation of lifespan. AT1A -/- mice developed less cardiac and vascular injury. Absence of AT1A receptor protected aorta and kidney from oxidative damage. Alleviation of aging-like phenotype was associated with increased number of mitochondria and upregulation of Nampt1 and sirtuin 3 (SIRT3) survival genes 3 in the kidney. In cultured tubular epithelial cells AngII downregulated SIRT3 mRNA, an effect prevented by AT1 receptor antagonist. These results unravel a novel function for AngII acting through AT1 receptors as a mediator of normal aging processes through attenuation of oxidative stress and overexpression of Nampt1 and SIRT3. These results suggest that sartans, receptor antagonists of AT1, can protect organs from aging processes.

The renin-angiotensin system (RAS) has critical functions in regulation of blood pressure and cardiovascular physiology (1).
Its role in the pathogenesis of a number of disease states has been well documented and components of the RAS are important pharmacological targets in hypertension and cardiovascular disease. Responsiveness to angiotensin II (AngII) is conferred by the expression of two classes of pharmacologically distinct receptors (AT1 and AT2) (4) . The effect of AngII to increase blood pressure and to promote various pathologies is mediated by AT1 receptors which are expressed in various organ systems including the heart, blood vessels, kidney, adrenal glands and cardiovascular control centers in the brain (2) . Here, we identify a novel function for AngII acting through AT1 receptors as a mediator of normal aging processes. Furthermore, our studies suggest that inhibition of AT1 receptor signaling attenuates senescence and prolongs lifespan in mice.

A prospective observational study was performed in 20 homozygous mice deficient for AT1A receptor - the major mouse AT1 receptor isoform and the closest murine homologue to the single human AT1 receptor (5) - and 10 wild-type controls. The animals lacking AT1A receptor substantially outlived their wild-type littermates (figure 1). 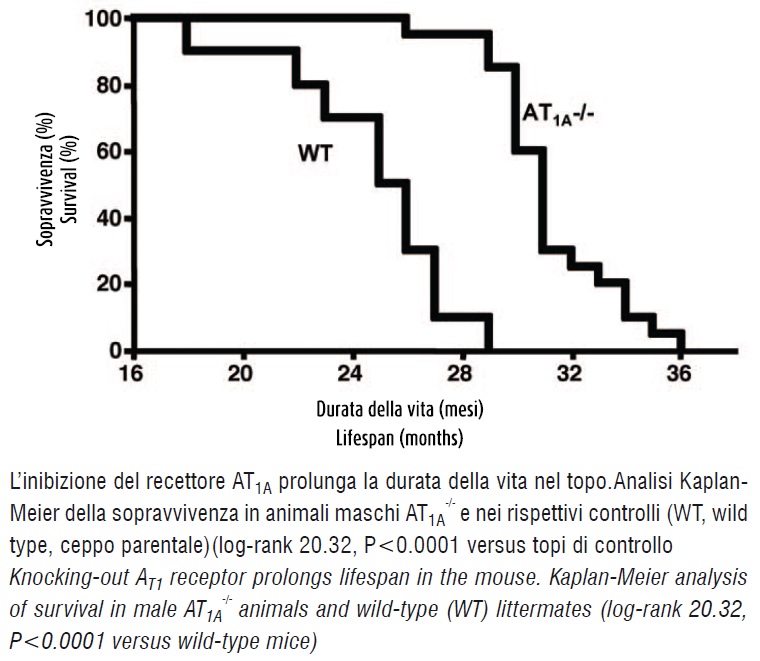 At 29 months, when all wild-type animals died, 17 AT1A receptor-deficient mice (85%) were still alive. These remaining mice lived for additional seven months. Comparison of sur- vival curves showed a highly significant difference between groups (P <0.0001). The lifespan of the AT1A - deficient mice was ~ 26 % longer than controls. Caloric restriction and small body size are associated with increased longevity (6-7). To assess whether caloric intake was affected by the AT1A receptor mutation, daily food intake was carefully monitored at 19 to 21 months of age. Food intake was virtually identical between AT1A -/- and wild-type mice. Body weights were slightly but not significantly reduced in AT1A -/- compared to wild-type littermates until month 18 when they became indistinguishable. AT1A -/- mice had normal physical activity as reflected by their ability to perform on a rotarod. The test measures the latency to fall off the rotating rod. Adenocarcinoma was observed in 10-15% of animals in both ageing cohorts. The incidence of tumor was not correlated with genotype and was lower than previously reported (~30%) (8). At the end of the study, heart, aorta, pancreas, kidney, liver, spleen and brain were collected to assess pathophysiological consequences of AT1A receptor-deficiency on organ structure. Morphological differences between AT1A -/- and wild-type animals were observed in the heart, aorta, and pancreas.
The heart weight/body weight ratio and left ventricular mass were comparable between AT1A -/- and wild-type mice. No difference was found in the number of cardiomyocytes in transverse sections of left ventricle.
By contrast, myocyte cross-sectional area, an index of myocyte size and fibrosis, were significantly lower in AT1A -/- than in wild-type mice (figure 2). For example, morphological analysis of serial heart slices showed that deposition of collagen in interstitial spaces was reduced in the AT1A -/- animals (figure 2). 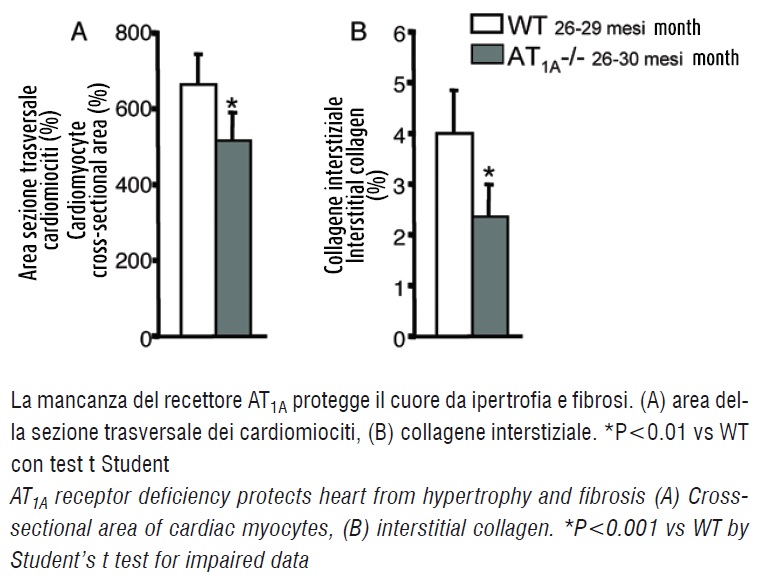 AT1A -/- mice did not develop lesions throughout the aorta. By contrast, 50% of wild-type mice showed a 2-fold increase in atherosclerotic lesions in the aortic sinus compared to AT1A -/- animals. While pancreata from AT1A -/- mice appeared normal morphologically, wild-type littermates manifested lymphoid aggregates that encompassed a significant proportion of the islets.
However, the aggregates rarely penetrated the islets and were not associated with necrosis. To determine whether insulitis in wildtype mice resulted in a loss of β cells, staining for insulin was performed. The extent of staining for insulin was virtually identical in AT1A -/- and wild-type mice, thereby indicating a comparable number of insulin-secreting cells. There was no difference in fasting glucose levels between AT1A -/- and wild-type mice. Urinary protein excretion levels were within the normal range along the study in AT1A -/- and wild-type mice. Twentyfour-hour urinary volumes were relatively constant in both groups but were higher in AT1A -/- mice compared to the wild-type group consistent with an impaired urinary concentrating mechanism described previously in these animals (9). Renal function did not change during the study and was comparable between groups.
Oxidative stress is a principal contributor to aging. In the fly and the mouse, gene mutations that enhance resistance to environmental stresses extend lifespan. Mitochondria, the main cellular source of reactive oxygen species, are particularly sensitive to oxidant damage. Tissues from aging animals have a reduced number of mitochondria and these mitochondria show several functional changes including increased superoxide and H2O2 generation and decreased energy production (10) .
Kidney proximal tubular cells possess large number of mitochondria and are highly dependent on mitochondrial energy production for proper function (11). In wild-type mice, the numerical density of mitochondria in proximal tubule cells was significantly reduced (P<0.01) in aged compared to younger 2 month-old animals (figure 3).
Lack of AT1A receptor protected mice from this loss of mitochondria with aging (P<0.01, figure 3). These results are consistent with previous descriptions of a beneficial effect of ACE inhibition to preserve mitochondria in aging mice (12). 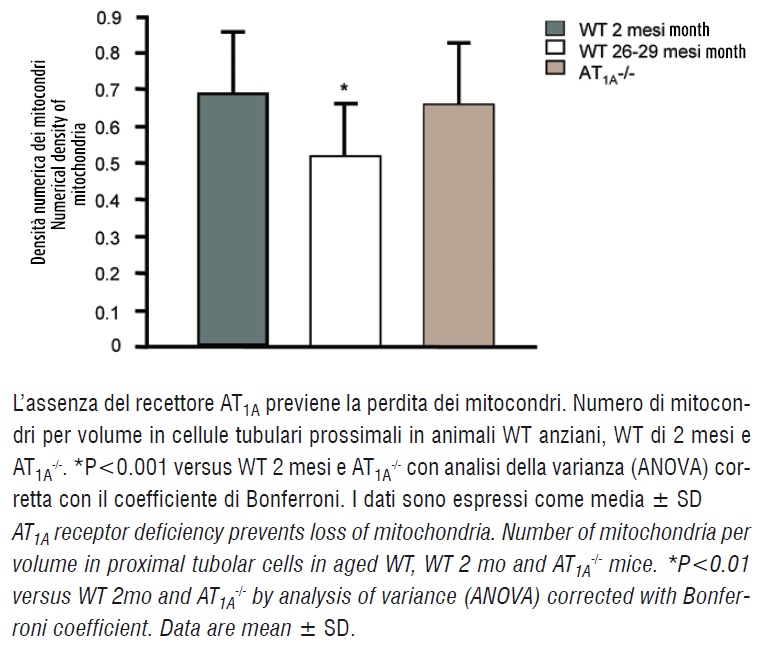 Mitochondrial sirtuins (SIRT) 3 and 4, members of histone deacetylase family that use NAD+ as co-substrate, appear to play a role in a longevity network (14) that maintains mitochondria vitality. Increased mitochondrial NAD+ levels consequent to overexpression of Nampt1 protects cells from death via activation of SIRT3 and 4 in the context of nutrient restriction (3).
We wonder whether high levels of AngII measured in AT1A -/- mice induced Nampt gene which in turn could prevent age-induced mitochondria death.
Transcript levels of both Nampt1 and SIRT3 were remarkably increased in kidneys from AT1A -/- in respect to wildtype animals (figure 5).
To determine the relationship between AngII and SIRT3, mouse proximal tubular epithelial cells were exposed to AngII in the presence or absence of angiotensin II receptor antagonist, candesartan, and SIRT3 mRNA expression was evaluated by real time PCR. A reduction of SIRT3 mRNA levels was observed after AngII challenge which was prevented by candesartan (figure 5), thereby providing a biochemical link between AngII and SIRT3 via AT1 receptor. Altogether these findings can be taken to indicate that Nampt1 and SIRT3 promoted mitochondria vitality contributing to prolong survival. 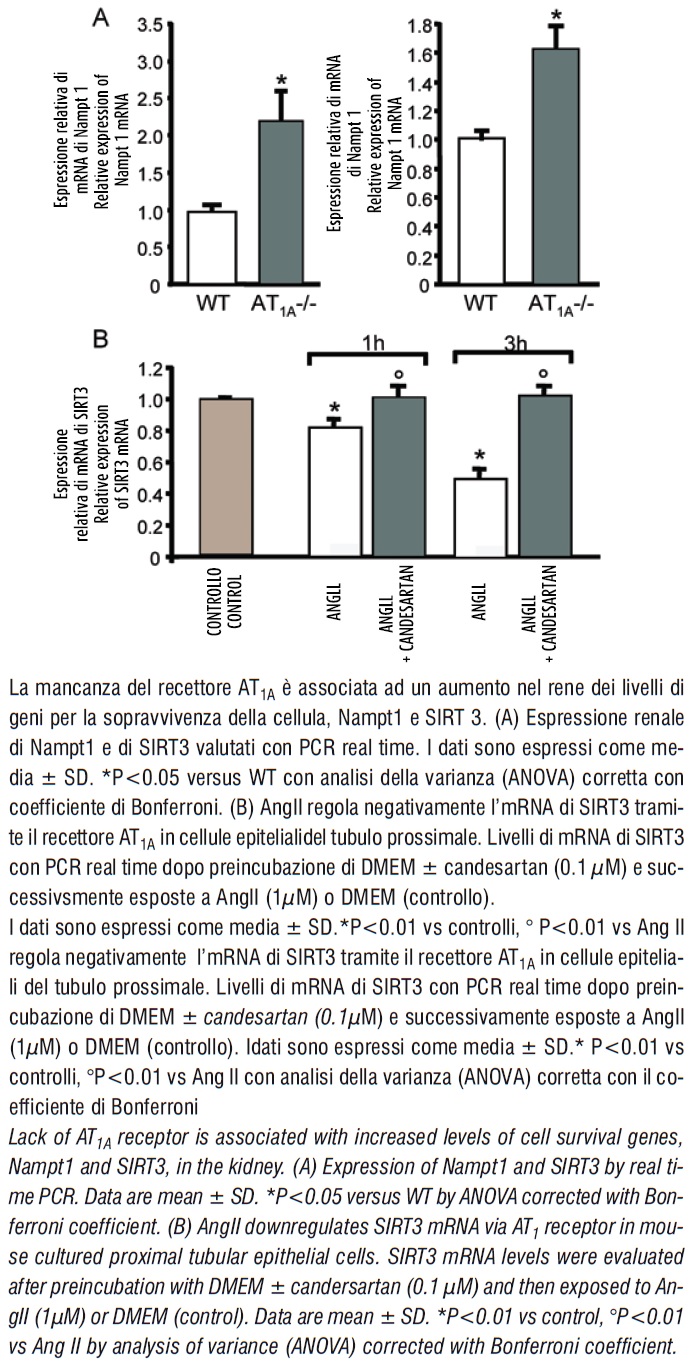 Here, we demostrate that mice deficient of AngII type 1A receptor (AT1A -/- ) lived longer, developed less cardiac and vascular injury and the absence of AT1A receptor protected aorta and kidney from oxidative damage. Alleviation of aging-like phenotype was associated with increased number of mitochondria and upregulation of Nampt1 and sirtuin 3 (SIRT3) survival genes 3 in the kidney. The extension of lifespan described here is comparable to that of mice lacking the insulin growth factor-1 (IGF-1) receptor (15) or the p66 isoform of the proto-oncogene Shc, the major transduction molecule of IGF-1 receptor (16) . Of note, prolonged survival induced by resveratrol (17) - a small molecule found in red wine which activates SIRT1 and mimics the anti-aging effect of caloric restriction - is associated with increased mitochondrial number (17) and is dependent on the upregulation of sirtuins (18).
Moreover, resveratrol downregulates AT1 through SIRT1 activation in cultured vascular smooth muscle cells and mouse aorta implying that inhibition of AT1 receptor contributes to resveratrolinduced longevity (24). Sirtuins can be therefore regarded as a potential therapeutic target for diseases of aging and to extend life. This is consistent with findings that Sir2 homologues do actually prolong lifespan in worms and flies mimicking the life-prolonging effects of caloric restriction (18).
Activators of SIRT1 ameliorate insulin resistance and enhance mitochondrial capacity in experimental diabetes (19). However, manipulating the sirtuin pathway in humans is not imminently feasible. In contrast, AngII type 1 receptor antagonists have been proven safe, well-tolerated for chronic use and are used as a key component of the modern therapy for hypertension and cardiac failure (20). Therefore, our study offers a strong rationale for exploring the possibility that AT1 receptor antagonists reduces organ senescence in humans by limiting oxidative stress and enhancing SIRT3 expression. Further studies are necessary to deepen the role of AT1 receptor in humans and to understand whether its function is similar to that found in animals.