The history of Leadership Medica

LEADERSHIP MEDICA births in the June of 1985 from a project of Genina Iacobone (in the photography above), Founder and Editor-in-Chief, with the aim to spread the knowledge and the work of the top Experts in every field of Medicine.
The Editor-in-Chief bases the editorial project on the concept that being a Doctor doesn't exhausts in the Profession itself, but it implies a modus vivendi: she decides, thus, to extend the subjects treated in the magazine to Arts and Humanistic Culture, other than articles on the Latest News, in order to enrich non only the Doctor in his Profession, but also in his being a Person. 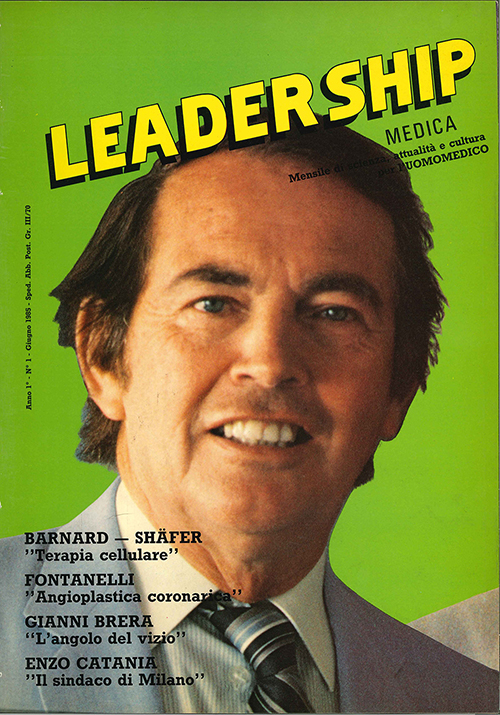 The very first of the big Leaders was Christiaan Barnard who, in the June of 1985, took the place of honour on the cover of the first number of the Magazine (see the image) together with Professor R. Schäfer, and he gave birth to a landmark article that described the still actual foetal staminal cells use for tissues regeneration.
It is just the first number of the Magazine, yet we talk already of "cellular therapy", telemedicine and the relationship between Medicine and technical and computing innovations that are spreading in the health field, thus demonstrating the forward-looking approach of the Editor-in-Chief.

Later, in 1986, the first version of the website of Casa Editrice Cesil arises, as one of the first IT and web pioneers, with which the Editorial Team wants to reach an international level of spread non only for LM, but also for the other Magazine: Leader for Chemist, focused on pharmaceutical sector, and leater the youngest Health Strategy, which focused on the management of Health Care Policies.