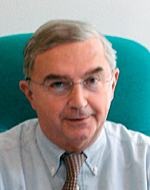 Poland Syndrome is a rare congenital abnormality involving the chest wall and the arm, displaying differing degrees of severity and of functional and aesthetic impairments. The role of paediatric surgeons is restricted to severe cases requiring plastic surgery on the chest owing to clear malformations and asymmetries or to the risk of trauma for the chest viscera. In the paediatric age the chest malformation may require costal transposition, correction of the sternal malformation (sternal depression or protrusion), or minimum plastic surgery on the chest with a prosthesis.
This work shall describe Poland Syndrome from a clinical, genetic and diagnostic-therapeutic point of view, with case histories from the Giannina Gaslini Institute, which is a reference centre for this malformation.

FOREWORD
Poland Syndrome (PS) is named after Alfred Poland, who described it in 1841, although other sporadic cases had already been described. In his work1, Poland described a range of several abnormalities, among which the absence of the pectoralis major and pectoralis minor muscles and syndactyly. In fact PS has over the years expanded to include other features, described by the scientific research works that followed on the subject, and we can now state that it displays a broad range of possible homolateral congenital abnormalities. It indeed displays variable combinations of chest hypoplasia/aplasia with costal involvement, or involving the pectoralis major muscle (usually the sternocostal head) and the pectoralis minor muscle, with or without an ipsilateral involvement of the arm (brachysyndactyly). A compulsory diagnostic criterion for PS is the presence of aplasia or hypoplasia of the pectoralis major muscle figure 1 (below) and at least one combined abnormality. Among these, the most frequent are costal aplasias/hypoplasias, depressions of the chest wall, atelia or amastia, absence of axillary hair, hypoplasia of subcutaneous fat, radius hypoplasia and hand malformations figure 2. The malformations affecting the hand vary substantially and are not related to the severity of the chest malformations. 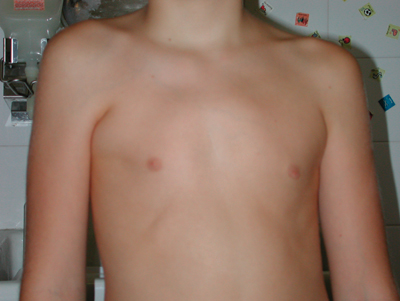 INCIDENCE
The incidence of PS is rated around 1/30,000 born alive2.
The right-hand side of the body is affected twice as often as the left side and there is a male preponderance versus females quoted as 3 to 2. The most common abnormality is the absence of the pectoralis major muscle.
PS usually appears in a sporadic and unilateral form, even though a bilateral case has been described3.

PATHOGENESIS
The cause of PS is unknown. This abnormality is congenital and sets in during the embryonic life. PS may be caused, in some cases, by an anomalous foetal vascularization with ischemia affecting the tributary territory of the subclavian and vertebral arteries and/or of one of their branches during foetal development. The embryonic stage during which it has been suggested that an interruption may take place in the embryonic blood supply of the subclavian arteries is around the 6th week of pregnancy. During this week the pectoralis major muscle divides into its clavicular and costal heads, from which the pectoralis minor muscle and the sternocostal head of the pectoralis major muscle later originate4. Furthermore, during the 6th week the fingers develop by starting to separate from each other. Lastly, during the same week, the vascular pattern from the 6th arch differentiates into the vertebral and subclavian branches. Researchers speculate that an ischemic event, or else a traumatic intrauterine event, may alter the migration and differentiation of the cells which are to form the pectoral muscles5,6.
The term SADS, which stands for the English words “Subclavian Artery Supply Disruption Sequence”, was suggested7 for a range of abnormalities which shared a common etiopathogenic event, that is an intrauterine damage to the blood supply coming from the subclavian artery, owing to traumas, extrinsic pressure or edemas. Such abnormalities can be diagnosed at time of birth and include, among the others, besides PS, the Klippel-Feil anomaly, the Möbius Syndrome, transverse limb defects and the Sprengel anomaly.
A higher incidence of leukaemia in patients suffering from PS has been reported8. 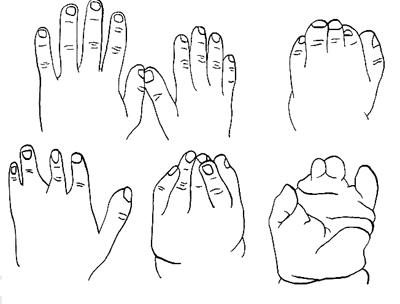 GENETICS
In most cases PS is sporadic, with a negligible risk of reoccurrence in the same family.
In a few cases literature has described a dominant autonomic transmission with incomplete penetrance, in which the anomaly was transmitted by the affected father to the son9. Furthermore, a typical case of left-side PS was described in two second cousins10, as well as a family displaying for three subsequent generations the unilateral absence of the pectoralis major, of the anterior serratus and of the dorsal major muscles11.
Researches speculate that a multi-factorial transmission may apply. In special way, intrauterine exposure to certain drugs, such as Misoprostol or Ergotamine between the 6th and 8th week of pregnancy may lead to the Möbius Syndrome, which, as mentioned, shares with the PS a common cause: SADS.

CLASSIFICATION
As mentioned, PS is a congenital anomaly displaying a wide range of possible malformations, and, in view of its clinical variability, it is not easy to classify the various forms and group them together based on clinical features.
It is however possible to classify the various malformations affecting the arm, as recently proposed by Al-Qattan12, based on severity.

CLINICAL CLASSIFICATION
We are now producing a detailed list of the various clinical manifestations of SP reported in literature. We remind the reader that a PS diagnosis requires impairment of the pectoralis major muscle combined with one or more of the following features:
Absence or hypoplasia of the pectoralis minor muscle.
Hand anomalies. These vary substantially, see table 1. They range from the absence of anomalies to a slight asymmetry, to micromelia, brachydactyly, oligodactyly, syndactyly, preaxial oligodactyly and ectromelia).

Chest anomalies. These in turn are broken down into: 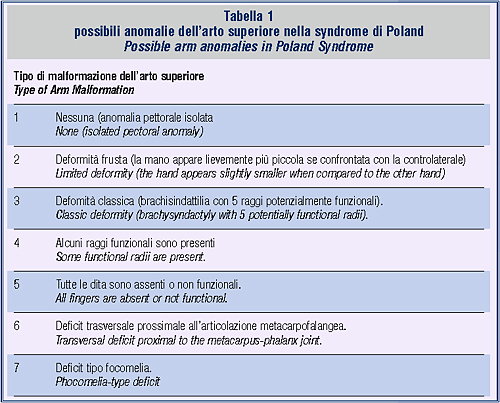 DIAGNOSIS
Diagnosis is usually clinical, since all the possible clinical varieties of the syndrome can be observed, in special way hypoplasia of the pectoralis major muscle and homolateral malformations of the arm.
Radiological examination is important in order to accurately evaluate all existing abnormalities. In particular, chest x-rays and abdominal ultrasound scanning are always to be carried out. Chest computerised tomography is very useful in order to define the chest deformities and to evaluate indication for surgery, in which case it is always advisable.
A radiological examination of the arm shall always be recommended whenever an anatomic or functional anomaly is reported for this limb.23

During the paediatric age, as far as orthopaedic malformations are concerned, syndactyly needs to be corrected around the age of one, whereas the best age for the surgical correction of the other malformations affecting the hand shall vary, depending on the type and severity of the anomaly.
As regards the paediatric surgeon, the most frequent indication is severe chest asymmetry, which may lead to aesthetic or functional problems affecting the cardiovascular apparatus, and/or the existence of “exposed” areas, in which the chest viscera are liable to dangerous traumas and herniations. The existence of costal aplasia or hypoplasia without clear deformities or viscera trauma risks does not represent in itself a reason for surgical indication.
As regards the adolescent and adult age, there usually are no functional impairments involving the need for surgery, which is why the indication is usually related to cosmetic purposes, depending on the cases, to correct aesthetic chest deformities and mammary or nipple hypoplasia or aplasia. If severe, these deformities may lead to major psychological or behavioural problems, especially in females. These operations, which fall within the field of competence of plastic surgeons, are to be conducted upon completion of pubertal development, as it is necessary to wait for the complete development of the contralateral breast, in order to carry out a symmetric mastoplasty in a single session. The surgical reconstruction of the pectoral muscle is often carried out at the same time, with a rotation flap of the major dorsal muscle25. In addition to the risk of secondary flap ischemia, leading to a subsequent partial atrophy, this method involves an exposure to possible further weakening of the arm, which is why, even though often indicated in females, where it plays a major role in supporting the mammary prosthesis, in males it needs to be evaluate on a case-to-case basis.
As regards the correction of deformities affecting the rib cage, the earliest description of a corrective operation related to PS was provided by Ravich in 196626, who resorted to the transposition of autologous ribs and to a Teflon band to correct the chest deformity. Different reconstructive techniques were subsequently described, involving the use of other materials (lyophilised dura mater, Marlex band, Vicryl net), with or without combined costal transposition.
In our opinion, with SP, it is important to be invasive as little as possible and in the paediatric age only correct the cases which really require surgery, owing to psychological or functional reasons, and correct in special way cases involving clear asymmetries caused by sternal rotation, protrusion or depression. In our opinion, autologous costal transposition preserving the costal perichondrium should only be resorted to in the rare cases involving viscera trauma risks due to the absence of costal protection, see figure 3 Furthermore, for aesthetic reasons it may be necessary to carry out resections of protruding ribs, sternal rotations by means of transversal or wedge osteotomy, insertion of transsternal stabilizers (metal bars, as much more often accomplished in the case of pectus excavatum). It may often be sufficient to correct the chest asymmetry by inserting a band in synthetic material in-between the ribs, see figure 4. Lastly, we need do point out that, as a rule, physiotherapeutic exercise and gymnastics are not helpful for the correction of chest asymmetries, but may in fact even increase the asymmetry if this is caused by muscle hypoplasia.

CASE HISTORIES FROM GIANNINA GASLINI INSTITUTE
At the Paediatric Surgery Department of Giannina Gaslini Institute, headed by Prof. Vincenzo Jasonni, we have studied the case of 20 patients affected by PS. The related data is summarised in Table 2.

The male/female ratio was 3/1.
The number of patients subject to surgery owing to chest deformity was8. In these cases plastic surgery was carried out on the chest, including in some cases costal transposition.
AISP, the Italian Association for Poland Syndrome, was founded in October 2003 in Genoa. The chairwoman of the association, Ms Eva Pesaro Naticchi, in alliance with Gaslini Hospital and in special way with Professor Vincenzo Jasonni, former chairman of the scientific committee, has organised two nationwide scientific conferences on the syndrome. The second event, taking place in October last year, dealt with the position of scientific research and future prospects with regards to Poland Syndrome.
The round-table conference had among its participants specialists in:

The Association which has an Internet website www.sindromedipoland.org, organises in conjunction with IGG out-patient stays in hospital for patients suffering from the syndrome, who are subject to multi-specialist (surgical, orthopaedic, genetic and psychological) checkups, aiming at an accurate genetic and clinical organisation of a longitudinal therapeutic programme and at providing adequate information to the families.