Breast cancer is still one of the biggest problems for healt scheduling and for the community.
It is important to take account of the fact that nowdays 40%of tumors in the breast are diagnosed with negative axillary lymph nodes, with 80%of diagnoses referring to breast-limited disease.
The disease-free survival rate(DFS)at 10 years post-diagnosis is 60% for women having negative lymph nodes, while for women with positive lymph nodes the same 10-year rate is 30%. Following 30 years of clinical trials, our own data safely indicate that multiple drugs yield higher response rates than does a single drug, and that multiple therapeutic cycles are more effective than a single cycle.
It is probable that within the next ten years the major impact on the evolution of neoplastic disease in the breast will be supplied by developments in endocrine therapy.
The use of the hormonal weapon is already about to be sharpened up and shed of those side effects that are linked with it, i.e. the onset of insensible clonus, thromboembolic disordes and endometrial cancer. Data analysis confirms the fact that the adjuvant therapy, even with the improvements of recent years, is "out of proportion" to the cause.

Breast cancer is still one of the biggest problems for health scheduling and for the community (1).
With its 30,000 new cases per annum (a crude incidence rate of 118.6 new cases/100,000) and a mortality rate of 11,250 cases per annum (44.5 cases/100,000 annually), it is still the primary neoplasm for women and 54% of cases manifest at < 65 years when life expectancy in practice is about 20 years.
It is important to take account of the fact that, in relation to the more frequent periodic mammography checks, scheduled screenings, the increased sensitivity of imaging techniques and, not least, the deeper sensitivity to the problem by operators and patients, 40% of tumors in the breast are diagnosed with negative axillary lymph nodes, with 80% of diagnoses referring to breast-limited disease. The disease-free survival rate (DFS) at 10 years post-diagnosis, following just one surgical operation, is 60% for women having negative lymph nodes.
For women with positive lymph nodes the same 10-year rate is 30% (or more precisely: if the invaded lymph nodes are <_ 3, the DFS is 50%; if >_10, the DFS is approx. 20%) (2) (EBCTCG 1992).
The introduction of complementary therapies therefore has the purpose of augmenting survival free from disease for the natural duration of the life of the patient, thus improving life expectancy and quality. These propositions are translated into the adjuvant therapy concept, whose action is expressed on any micro-metastases remaining after surgery.Adjuvant therapy is by definition "disproportionate" because it is applied to patients that would not necessarily benefit, or because the surgical operation alone would be enough to heal them, or because they would not experience improvement with currently available treatments.
If one excludes those 11% of lesions having a diameter < 1 centimeter, with a positive receptorial stage to estrogens, histological G1 grade and age > 35 years, whose specific mortality rate for the tumor is < 10% at 10 years and that by definition absolutely do not need adjuvant systemic therapy, then for the remaining majority it is important to define what patients (prognostic factors) and what therapies (therapeutic factor) would have the most impact in survival terms. Now given that with the treatments currently at our disposal the absolute risk of death in women < 50 years old at 10 years from onset of the disease is lowered by 7%, and in those > 50 years by 2%.

The therapeutic factor
After 30 years of clinical trials, our own data safely indicate that combination drug regimens yield higher responses than does a single drug, and that multiple therapeutic cycles are more effective than a single cycle.
We also know that chemotherapy increases both the overall survival rate and the disease-free rate, but that it is useless to continue therapy with a drug beyond three months (EBCTCG 1995) (3).In the context of drugs, we know that the use of anthracyclines is more effective than CMF, when the standard 60 mg/mq of doxorubicin would be used (NSABP B22-1997) (4).But in these last five years some hypotheses have become standard therapeutics, when it was noticed that (CALG89344, Tab. 1) using drugs having different actions (taxans) and taking account of dose-density (drug dosage in reduced periods), the overall 5-year survival improved by 36% and DFS by 46%. 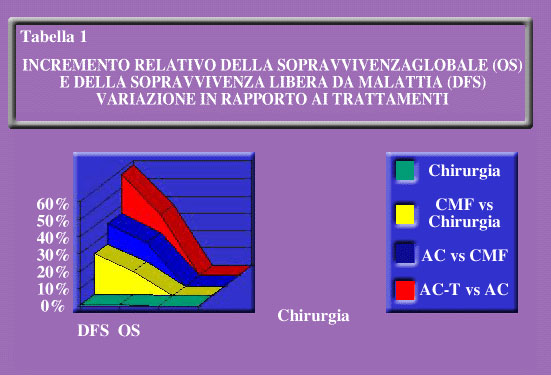 This is why the standard therapy in the USA for node-positive women, and for node-negatives but at high risk, is sequential treatment with cyclophosphamide and doxorubicin (CA) for four cycles every 21 days, followed by a further four cycles of paclitaxel every 21 days (5).It is likely that within the next ten years the biggest impact on the evolution of breast cancer will come from the development of endocrine therapy. When a tumor expresses receptors for estrogens and/or progesterone, independent of age, menopausal status, lymph nodal status and concomitant chemotherapy, then using tamoxifen for 5 years (Tab. 2), the risk of relapse is cut by 42% (+_3) and the death risk by 22% (+_4). And this benefit is maintained even in the 5 subsequent years (33% reduction in the relapse risk and 24% in the death risk). Moreover, the incidence of contralateral breast cancer is reduced by 47% at 5 years. 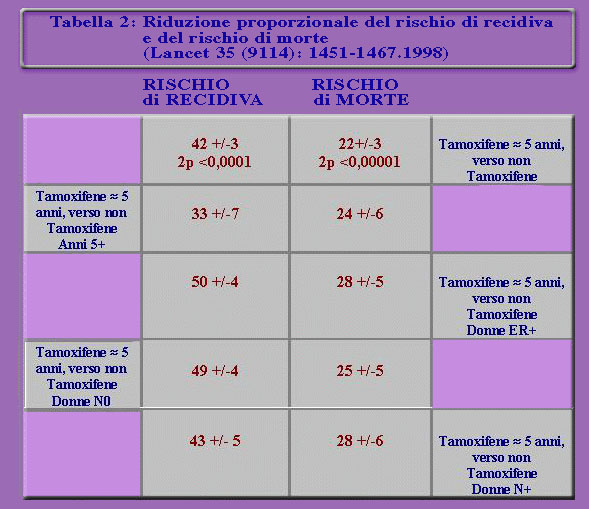 The use of the hormonal weapon may therefore be refined and relieved of those side effects that are linked with it, i.e. the onset of insensible clonus, thromboembolic disorder and endometrial cancer (tamoxifen, after y years' usage, quadruples the risk of ADC of the endometrium) (6). These are the tactics of the studies that are based on ovarian ablation (OA) in premenopause, with LH-RH, surgery or radiation therapy (Tab. 3) and current ones instead using aromatase inhibitors (Tab. 4), and finally those that combine chemotherapy and endocrine therapy in node-negative women (7). On 2,691 women described as at high risk of relapse because they presented either with T dimensions >_ 2 cm, or negative hormonal receptors, or diploid tumors with S phase > 7%. Treatment consisted in CMF or CAF chemotherapy, followed or not by 5 years of tamoxifen.In the women with positive hormonal receptors, the DFS and overall survival are better in the group treated with chemotherapy + tamoxifen (88% vs. 83% and 94% vs. 92% respectively). 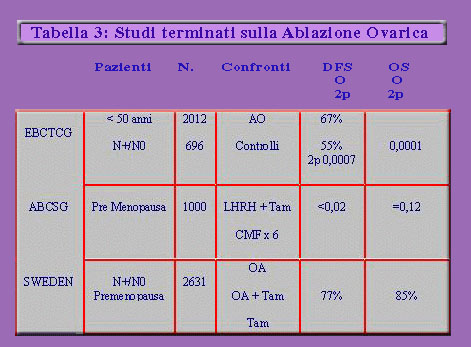 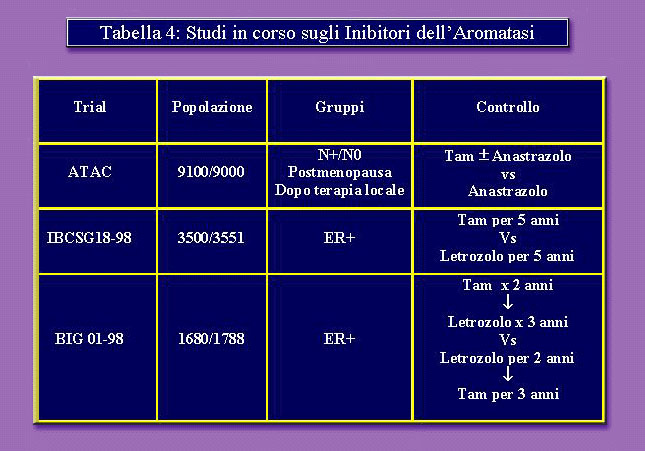 Combination treatment is inefficacious in women having negative hormonal receptors (Tab. 5) (8).We anticipated that when the specific mortality rate is < 10% at years, then no adjuvant therapy is indicated. Most of the breast cancer patients ask for and justify it, even if it is a question of modest improvement.The recent analysis of the data from NSABP studies, which concerned 1,260 women with neoplasia of <_ 1cm diameter and NO (504 women with lesions < 1 cm and thus not palpable) at 8 years' follow-up, shows that using a post-surgery adjuvant therapy, there is a sure improvement in the relapse-free survival rate both in the women having positive estrogen receptors and in those with negative receptors. Instead, however, the overall survival rate only improves in women with positive receptors, especially when a combined treatment is employed. Beyond the disappointing results, there is still no statistical validation that confirms the appropriateness of an adjuvant therapy for tumors of <_ 1 cm diameter. 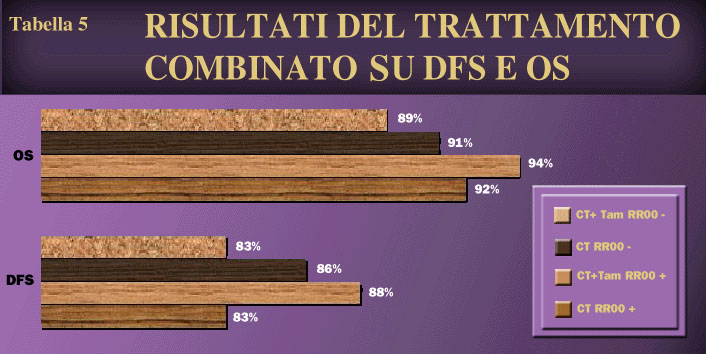 Prognostic factors
Treatment data analysis confirms the fact that adjuvant therapy, even with the improvements of recent years, is "disproportionate" to the cause. The selection of patients into differentiated risk groups, especially in the initial stages, may orientate towards appropriate therapeutic planning and reduced toxicity.One speaks of a "prognostic factor" to indicate a biological characteristic of the neoplasm such as to modify the patient's prognosis, i.e. the DFS. And of a "predictive factor" to indicate that characteristic able to anticipate a treatment's effectiveness.
The classic factors remain the sizes, number of lymph nodes, degree of differentiation and quantity of hormonal receptors present.However, there is not, in an absolute sense, one prognostic/predictive factor or set of factors such as to describe the individual situation in a quantitative (i.e. objective) way. The prognostic factors give a qualitative and 'odds' approach to the problem.The presence of estrogen receptors, for example, allows one to foresee a response to endocrine treatment of the ER+ and PGR+ patients (positive both for progesterone and for the estrogens) in 78% of cases, while in the event of negative receptors there are still 10% of women that do respond to endocrine treatment.In the last ten years, research has been focused on the implications of some biological indicators that are linked to invasiveness, the regulation of the cellular cycle, its triggering-off and its blocking.
Plasminogen activator (urokinase-type) or uPA forms part of the enzymes employed in the sequence of invasion and angiogenesis. It degrades the extra-cellular matrix, with a proteolytic action, and is inhibited by PAI-1 (plasminogen activator inhibitor).
When the uPA level, or that of its inhibitor PAI-l, is high, the DFS in node-negatives is reduced (85% versus 93.3%, i.e. when uPA or PAI-l are absent), this fact is already observed at 32 months' (and, if confirmed, could exclude about 50% of the NO women from adjuvant chemotherapy).
In NO patients followed for more than 10 years, the low rate of PAI-l associated with a low rate of cathepsin D is correlated with a relapse risk of 3%, whereas women who are still NO but have one or both factors raised, have 39% relapses and the overall survival rate is significantly lower too (p = 0.00211) (9).Among the cellular cycle regulators, p27kip (or p27) has a negative effect on kinase activity; an aggressive phenotype characterized by low levels of p27.With a negative effect instead on apoptosis, is the protein BAG-l (which is linked to the BCL2 protein) inhibiting apoptosis, which can be hyper-expressed in breast cancer. Its expression is associated with a longer survival.For these last two factors (p27 and BAG-l), the reported data is in effect sparse, discordant and everything is yet to be proven.The HER-2 c protein certainly arouses a greater (though not unanimous) consensus.This is the trans-membrane protein that activates the tyrosine kinase cascade and is expressed in 20-30% of breast cancers (10). Its hyper-expression lowers the DFS and immunohistochemical traumas may be caused or with genic amplification (PCR or FISH).When normal mammary tissue is compared (11) with the neoplastic form, women that present with hyper-expression > 15% or below normal levels have a worse 5-year survival. This is more evident when patients are a priori distinguished by means of a prognostic index like the Nottingham Prognostic Index (NPI) (Tab. 6). 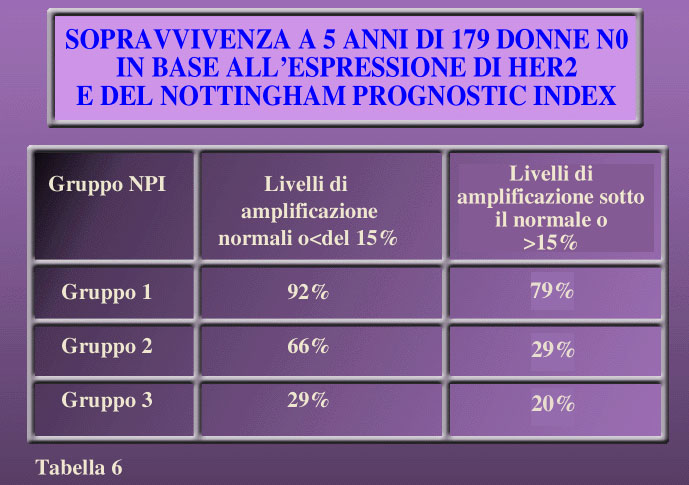 Although clinical studies indicate that HER-2 positive tumors are more sensitive to anthracyclines, two application problems are surely posed.
The first is that the assessment methods for the protein are still not standardized.For instance, on 1,243 cases studied consecutively with the Hercept Test tm, detected positivity was 22.9%; when the same cases were investigated with FISH, the overall rate of agreement was 90%, i.e. the methodologies' predictive value has still to be tested.
The second problem arises from the comparison between the therapeutic schemes, partly unusual but certainly with heterogeneous and drug dosages.In the advanced disease case, the use of the monoclonal antibody trastuzuma, which presents a high affinity for the HER-2 protein, combined with chemotherapy t induced an improvement in survival (25 months as against 20 months) with longer-lasting responses. This and other data has validated the clinical studies on adjuvants in which Trastuzumab is inserted into schemes based on the anthracyclines whether combined or not with taxans (NSABP, NCCTG and CALGB).

Conclusion
Current adjuvant therapies have improved the survival of women aged < 50 years by 11%, while for women > 50 years the improvement was 3%.
Combining the statistical differences between the treatments used so far and those now available or under observation, should these differences be confirmed, we shall be able to expect a survival improvement of the order of a further 10% for women < 50 years. In women > 50 years, the benefit could be less due to the impact of co-morbidity and life expectancy.Any personal risk is still all to be assessed, although the application methods are being studied.