Dyslexia has a prevalence between 1,5% and 4,5% in the Italian population. It is classified in the sphere of "Specific Learning Disability" (SLD) and includes reading, writing and calculation disorders, frequently associated in the same subject. The dyslexic child appears "normal" at all, except for the academic abilities. A sure diagnosis of dyslexia can be formulated only from the second cycle of the primary school, although some predictive symptoms can be seen also in an earlier age. In many cases a psychopathological disorder has been observed (ADHD, Mood, Disorder etc.), which in some subjects can be considered the consequence of an educational failure connected with the learning problems. The kind and severity of the disorder can be ascertained by specific psycho diagnostic survey. The prognosis depends on the severity of SLD, age and quality of rehabilitation. In the last grades of the primary school and in the middle school, vicarious instruments, such as a computerized writing program or vocal synthesis programs, can be used. In recent years, dyslexia has been one of the most frequent reasons for sending a child to the Child Neuropsychiatric Services. This should not be a surprise if we consider that the prevalence of the disorder in the Italian population has been calculated as between 1.5% and 4.5%. The cases of dyslexia diagnosed are constantly increasing, particularly in view of the work of sensitization and diffusion in schools by the Associazione Italiana Dislessia (Italian Dyslexic Association).
Dyslexia is classified as by DSM IV in the sphere of 'Specific Learning Disability (SLD). It includes reading, writing and calculation disorders which can be found isolated or, more frequently, associated in the same person. I would like to cite a piece of research in relation to this which was recently made at the Learning Disorders Service of the Unit and Chair of Child and Adolescent Neuropsychiatry of the Università degli Studi di Milano, co-ordinated by Dr Enrico Profumo, on the comorbidity between dyslexia, spelling and numeracy problems.
Out of 980 people coming to the Service from 2003-2007, 591 fell within the diagnostic criteria of SLD established by the Consensus Conference (2007) and attended classes from the third year of the elementary school (9-10 years of age) (52% elementary school, 29% lower secondary, 17% upper secondary). There was also a prevalence of males in our sample 64% versus 36% females. In 30% of cases, there was multiple conditions between dyslexia, spelling and numeracy problems while 11% of the people only came under the criteria of numeracy problems.
The criteria for distinguishing a child who generically 'doesn't do well at school' from a dyslexic child are quite simple. The dyslexic child has normal intelligence and doesn't have psychiatric or neuropsychological disorders which started at a pre-school age. Generalising, we can say that the dyslexic child appears 'normal' in all functions except the scholastic one relating to learning reading-writing and/or calculations.
Unfortunately, although less than before, there is still the tendency for teachers to consider the student with SLD as a child who doesn't want to study, who doesn't want to work or, worse, has having an emotional or affective problem. In fact, the disorder has a neurobiological origin, with a strong hereditary component, and is not due to psychological problems or social-cultural disadvantages. The behavioral problems often associated with learning disorders are not the cause of the difficulty but, rather, an effect as they are the reaction to a situation of the child's unease or rejection of proposals by the school which are difficult for him to face. 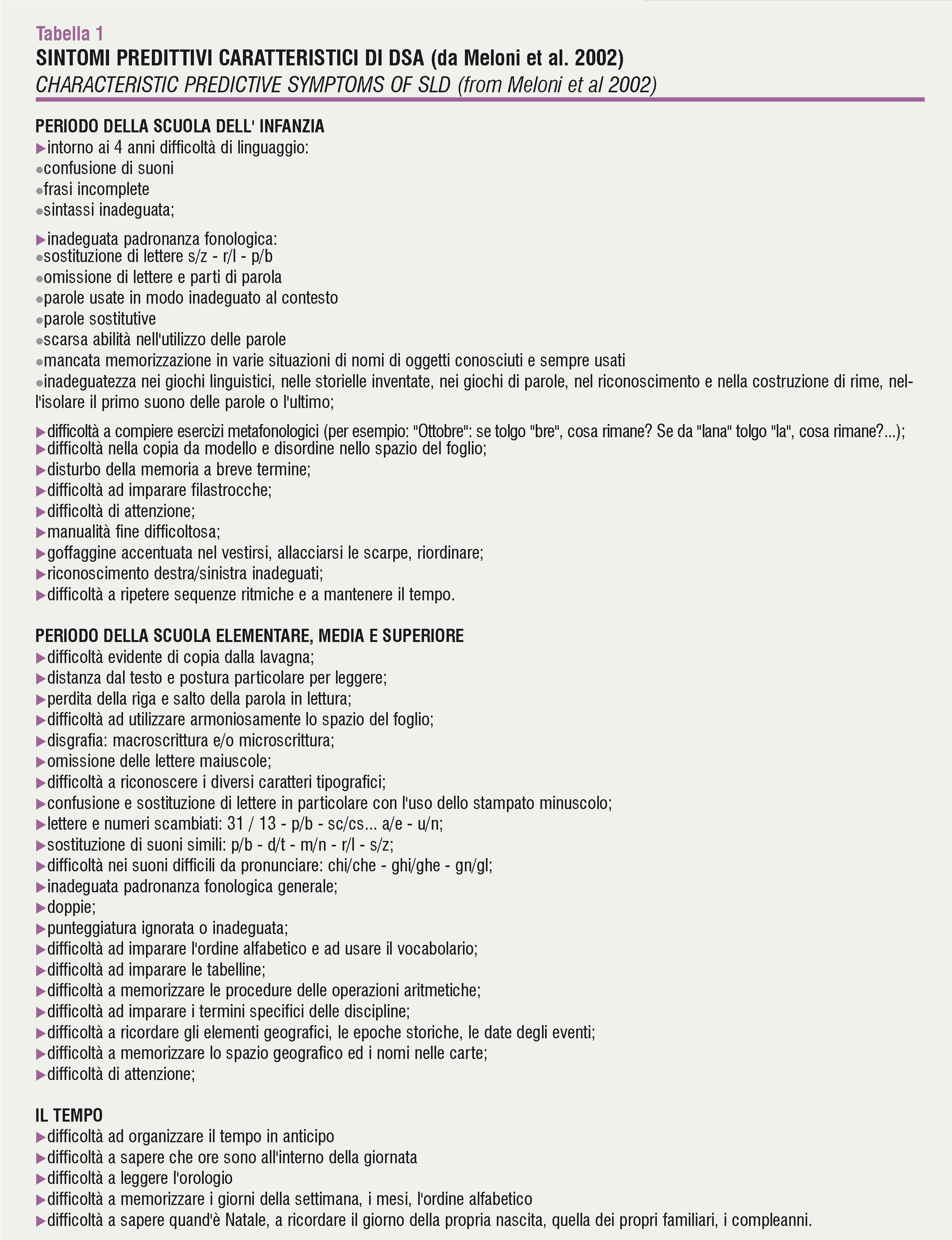 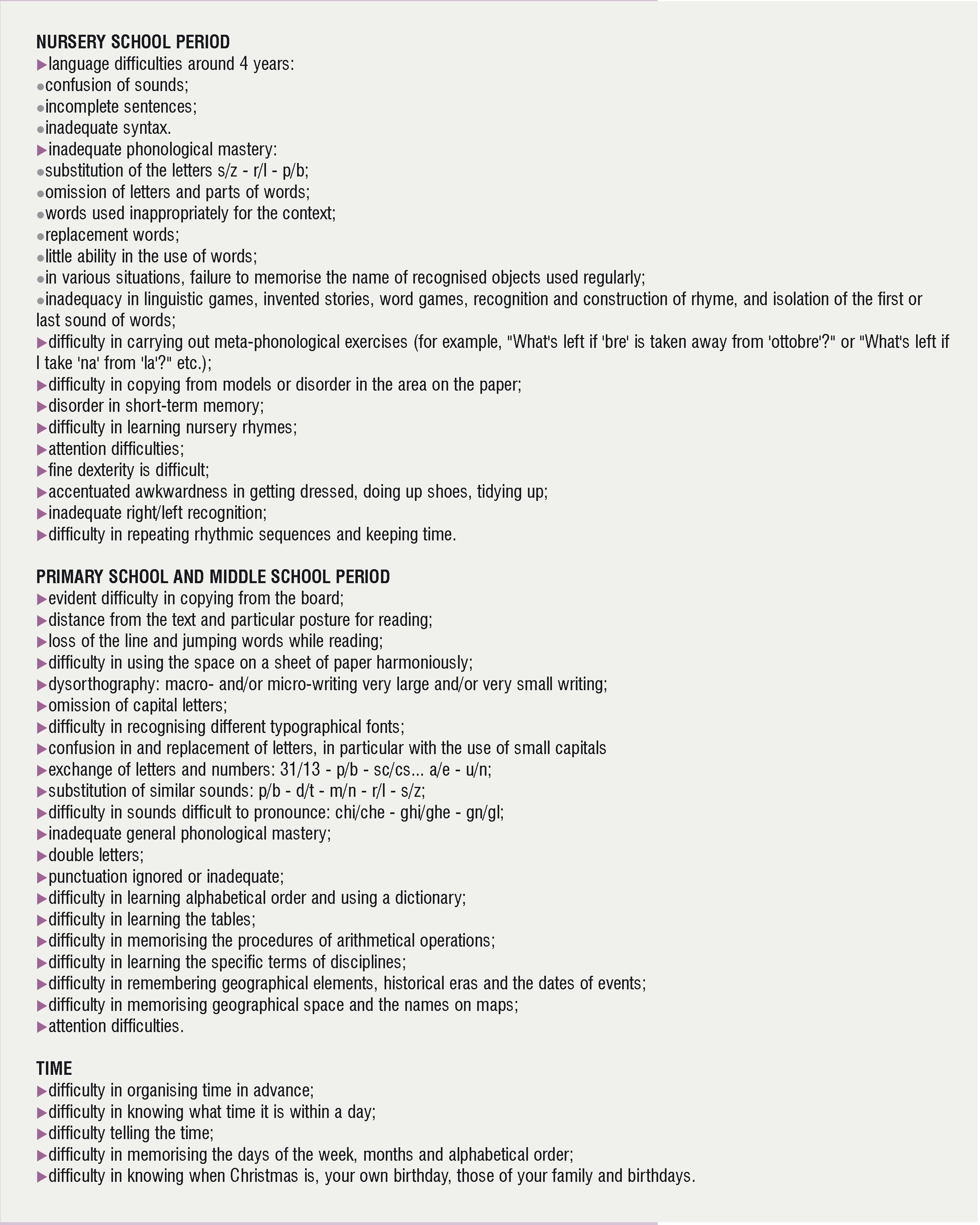 In general, the evaluation for school age children should be designed to determine whether the students are acquiring the skills associated with all of the basic symbol systems, including oral language, reading, writing, and mathematics, as well as nonverbal communication, thinking skills, and various cognitive processes, such as perception, memory, and spatial relations. Although the chief concerns are often related to general academic failure or to a specific area such as reading, it is important to investigate many areas of learning and behavior in order to assess the breadth and depth of the problem and to plan an appropriate program. For example, many reading problems may be related to oral language disorders, all of which may interfere with writing and mathematics. Therefore, is necessary to assess all areas of achievement.
The complexity of the phenomenon dyslexia also comes from its polymorphism, which makes it difficult to describe a single clinical picture. The problems often become noticeable in the first year of the primary school but in other cases they are highlighted in the following years. Early diagnosis is a very important aim both for a possible rehabilitation and for settling the scholastic programme. However, a true diagnosis of dyslexia can only be formulated from the second cycle of the primary school, when the children pass from the stage defined as 'alphabetic', which leads to knowledge of the grapheme and phonological correspondence necessary for reading and writing, to a study defined as 'orthographic' as those abilities are automated and reading and writing proceed through more consistent grouping, (morphemes, consonant group, etc.) and more complex rules (appreciation of non-homograph homophones and vice versa, etc.). Therefore, it is useful not to make the diagnosis as dyslexic too early in children in difficulty who, once they have learnt the reading-writing system, even if later, will not successively have the specific difficulties of dyslexic people. There are some indicators of a possible appearance of the disorder, such as difficulty/delay in language in early and later infancy which sometimes resolve spontaneously during development.

Difficulty in reading is rarely an isolated problem. A child often makes serious mistakes in spelling, writing and reading numbers or in making mental and written calculations and sometimes writes in a completely illegible manner. In these cases, we can speak of spelling, numeracy problems and dysgraphia, in addition to dyslexia. The gravity of the disorder varies; the greater the difference between non-verbal cognitive performance and reading ability, the more serious is the disorder. Conventionally, difficulty in reading is considered serious when the ability to decode is the same as that of a reader with two years' less education. Another criterion used for defining difficulty in reading is that which defines in the second standard deviation lower than the average expected for the age the parameter beyond which reading is considered lacking.
Before making a diagnosis of dyslexia, the following should be done: 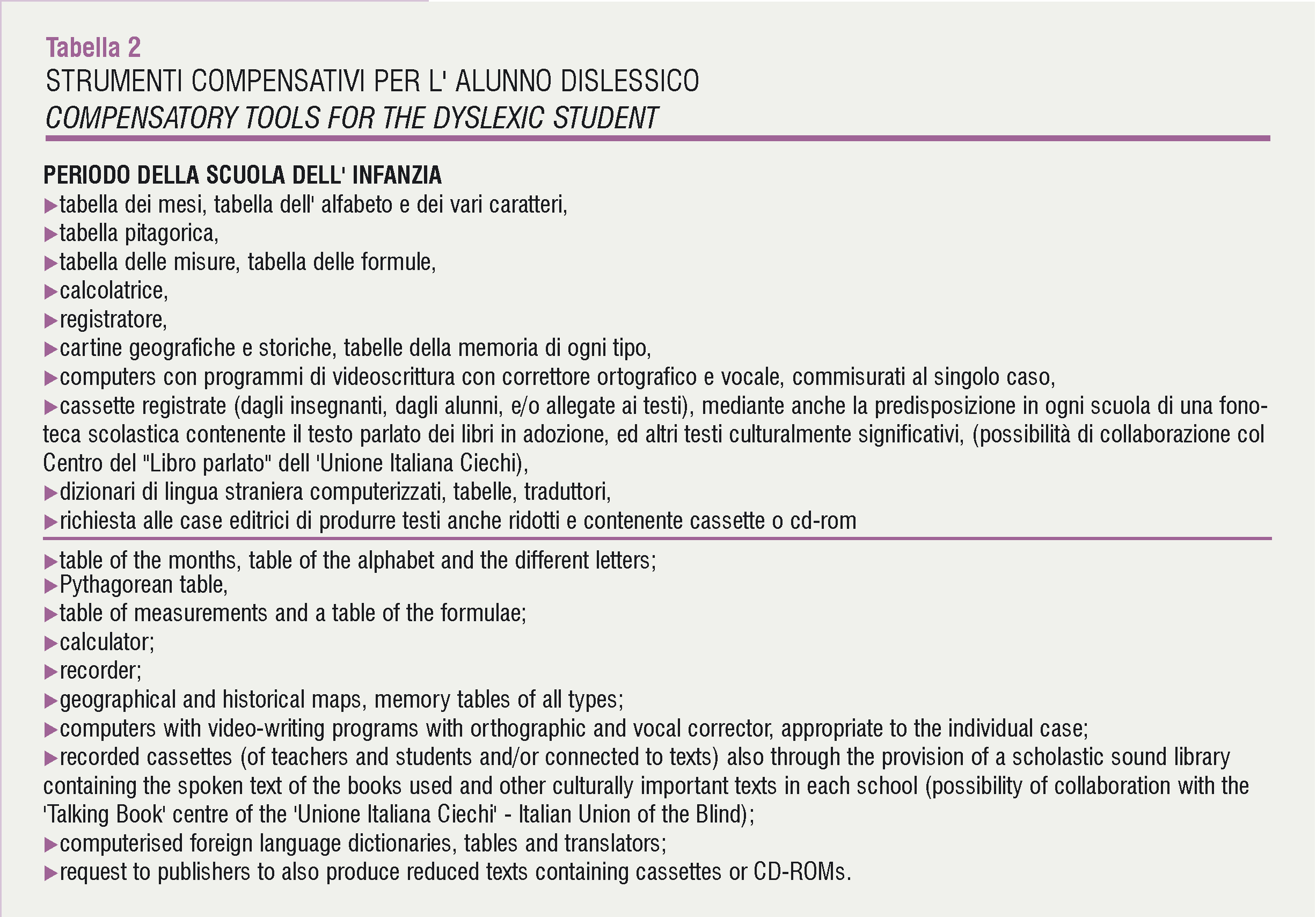 The evolution is correlated to the gravity of the SLD, the prompt and will done assistance, the cognitive and meta-cognitive levels and the existence of multiple psychiatric comorbidities. There is a more favorable evolution when the reading quotient (ratio between reading age and chronological age) is greater than 75, the difference between the chronological and reading ages is less than two years, diagnosis was made at the end of the second year in the primary school, rehabilitation was early, the cognitive level is above average and there are no other co-existing psychiatric disorders. The result is that, particularly when there is both difficulty in reading and calculation, the scholastic career of the child with SLD leads to great difficulties and psychological suffering. In not a few cases, this can determine negative psychological reactions such as somatization (nausea, sickness etc.) or behavioral disorders with aggression, or withdrawal. In general, the disorder is well supported by teachers in the primary school, while there are more significant difficulties, with repeated failure to pass the year, in the middle.
This seems to confirm the importance of a certain synchronism which the natural evolution of the disorder should have with the stages of education.
In other words, while delays in the process of acquisition of decoding can be tolerated in the primary school, they are no longer acceptable by teachers the middle school.
The most relevant problems concerning reading are slowness and mistakes; it has also been noted that, during compulsory schooling, speed improves more slowly compared with accuracy. However, account must be taken of the difficulty in starting and the long period of time expected, before results are obtained, in assessing the educational progress of each child.
The natural history of the illness has a long and difficult path in which phases of improvement and stagnation or even regression often alternate.
However, if the educational and rehabilitative courses are adequately supported at home and in the class, there are very good chances that the child will be able to go to the senior school and university.. 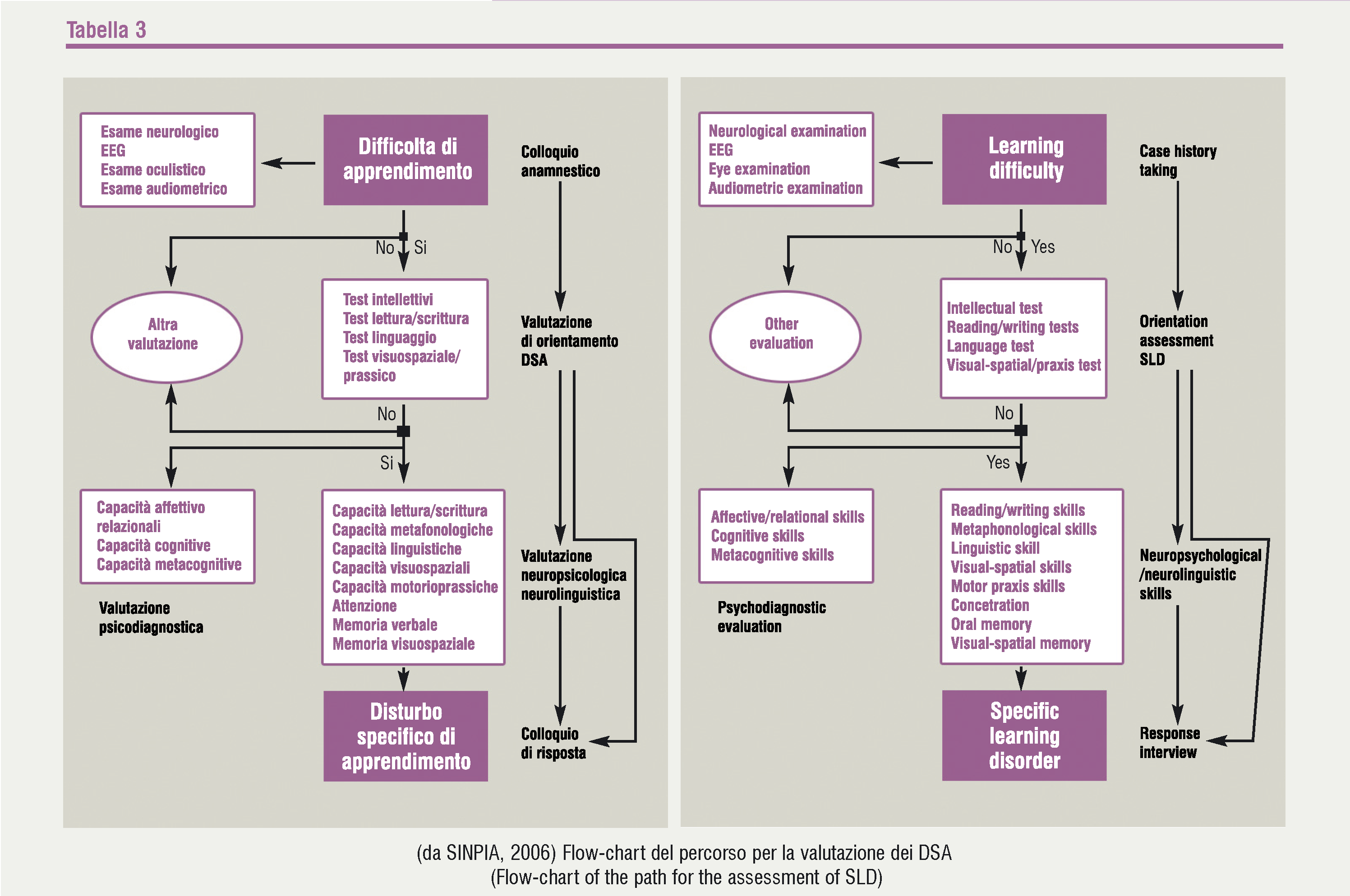 The problem of psychiatric comorbidity

In many cases, a psychopathological disorder associated with SLD has been observed. In some patients, this disorder can be considered the consequence of educational failure connected with the learning problems and tends to reduce in parallel with the improvement in educational difficulties. In other cases, SLD and psychopathological problems seem to have an independent course. On the behavioral level, the psycho- pathological asset can be summarized in two forms - oppositive (externalizing) or depressive (internalizing). ADHD (Attention Deficit Hyperactivity Disorder) and, to a lesser extent, the Oppositive-Provocative or Behavior Disorders, should be recalled among the former, because of the frequent association with SLD. The latter include anxiety, the somatoform disorders and those of mood. 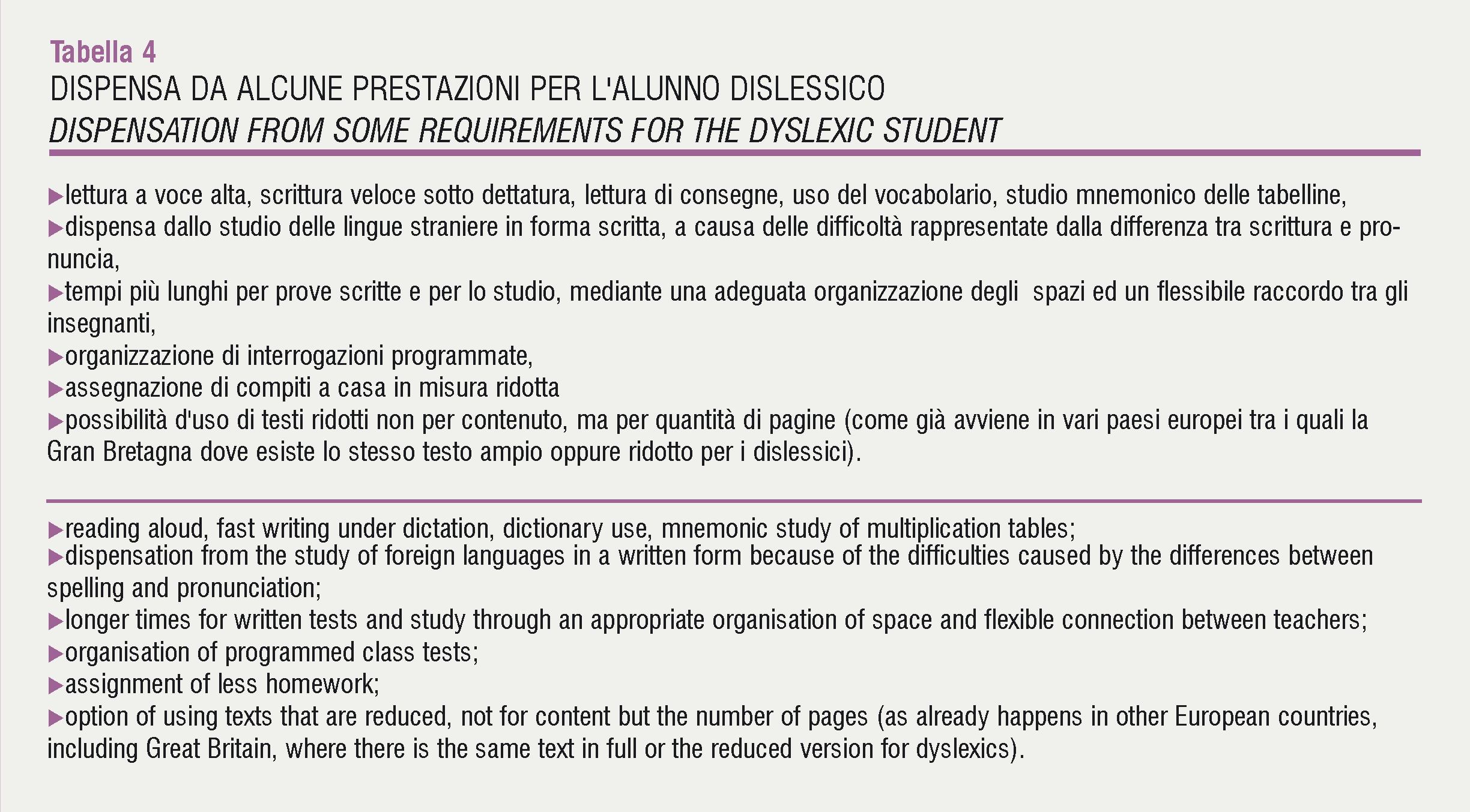 Considering that, currently, there is no documented scientific proof on the efficacy of the different logopedic rehabilitative treatments, it should be underlined that the work can be directed to the recovery of the reading-writing ability or, in the more serious cases and older children, the use of instruments vicarious manual writing (e.g. computer writing programs). The fundamental point is a careful neuropsychological assessment characterizing the gravity and kind of the disorder. In the first years of the primary school (first cycle, third and, if necessary, the fourth year) it is useful to make a specific rehabilitation aid, independently of the level of trouble. This could have a positive outcome and improve the accuracy of writing and correctness and speed of reading. On the other hand, in the last years of the primary school and in the middle school, vicarious instruments should be used.
Using a writing program and the spelling check not only enables better texts to be produced but, in the long run, also improves the writer's ability. In addition to these tools, vocal synthesis programs, which turn the computer into a 'reader' of texts produced or introduced, can be used.
Dyslexic children are able to correct most of the phonological mistakes if they can hear what word they have produced via the vocal synthesizer. However, it is mandatory to differentiate between the executive aspects of reading-writing and its uses.
The aim that teaching must follow is not knowing how to read or write but how to use these tools for learning. The children must, above all, find a way of learning other than the need to read everything on their own. It's in this area that the ability and experience of the teacher come into play, if they are able to identify ways of replacement and acquisition of the contents (use of audio-visual aids, the recorder, the synthesis of key-words, etc.) and follow the dyslexic child through to the most evolved levels of education.