Mesenchymal stem cells for the treatment of acute kidney injury

Acute kidney injury is emerging as a public health problem worldwide. The quest for a pharmacological therapy to ameliorate survival after acute kidney injury episodes has been largely unsuccessful. New therapeutic approaches for renal tissue regeneration have emerged, and one of the most promising is the use of stem cells to direct the replacement of damaged cells. In animal models and humans there is evidence that extra-renal cells of bone marrow origin can participate in kidney repair. Ischemic or toxic injury to the kidney can be sensed by bone marrow-derived mesenchymal stem cells that are able to engraft the damaged organ and to promote structural and functional repair. Studies by our group documented that murine and human mesenchymal stem cells of bone marrow origin infused in mice with cisplatin-induced acute kidney injury promoted renal functional and structural recovery by inducing renal resident cells to proliferate and reduce apoptosis, possibly via local release of the insulin- like growth factor-1 and to a lesser extent by differentiation in tubular epithelium. Moreover, bone marrow-derived mesenchymal stem cells of human origin hold potential in the treatment of cisplatin-induced acute kidney injury in immunodeficient mice and contribute to ameliorate renal perfusion by preserving capillary structure.

The increased interest towards mesenchymal stem cells (MSC) is associated to the prominent role that these cells have recenrecently raised in tissue regeneration. Mainly, they represent an important component of the hematopoietic stem cell niche in the bone marrow, where they contribute to hematopoietic stem cell maturation (Bianco et al., 2001). MSC are able to differentiate into tissues of mesenchymal and non-mesenchymal lineages such as cardiac muscle cells, hepatocytes and neurons (Jiang et al., 2002; Kopen et al., 1999; Schwartz et al., 2002; Toma et al., 2002). MSC are distributed throughout the organism and can be derived not only from the bone marrow but also from different organs and tissues such as brain, spleen, liver, kidney, lung, muscle, thymus and pancreas (da Silva Meirelles et al., 2006) and also from the cord blood (Erices et al., 2000). Several groups reported that bone marrow-derived cells can supply mesangial cells, podocytes and endothelial cells and that bone marrow behaves as reservoir for tubular epithelial cell physiologic turnover or regeneration following damage (Gupta et al., 2002; Ito et al., 2001; Poulsom et al., 2003; Poulsom et al., 2001). In mice with acute kidney injury induced by folic acid treatment, renal tubular cells have been found to originate from bone marrow (Fang et al., 2005). Gupta et al. examined the origin of tubular cells in male patients with resolving acute tubular necrosis who had received a kidney transplant from a female donor. They documented that 1% of the tubular cells were Y chromosome-positive in the kidneys after injury supporting the hypothesis that extrarenal cells can participate in the regeneration of tubules (Gupta et al., 2002).

Acute renal failure is a syndrome characterized by the rapid deterioration of renal function, with a decrease in glomerular filtration rate (GFR), accompanied by azotemia. Acute kidney injury (AKI) occurs in approximately 7% of hospitalized patients, especially those in medical and surgical intensive care units (Nash et al., 2002). Over the last thirty years, despite advances in supportive care, very little clinical progress has been made for decreasing renal dysfunction and mortality of AKI that still ranges from 30 to 80%. Dopamine, furosemide, mannitol, calcium channel blockers, atrial natriuretic peptide and several other hormonal or pharmacological substances have proved effective in experimental models, but almost invariably they failed in clinical protocols. AKI ensues upon ischaemic or nephrotoxic insult to the kidney and it is potentially reversible. However, the time course and extent of recovery of renal function depend on the nature of the underlying pathology. Cisplatin is among the most effective chemotherapeutic agents used in the treatment of neoplasia with a wide spectrum of efficacy against several solid tumours (ovary, testis, bladder, head and neck, lung, cervix and endometrium), but unfortunately it is also among the most frequent compounds leading to renal injury in 25-35% of patients. The hallmark of nephrotoxic damage is cellular ATP depletion that is associated with several intracellular events responsible of proximal tubular injury. Actin cytoskeletal dysregulation and loss of brush border are followed by alterations in junctional membrane proteins and detachment of cell-cell and cell-substrate adhesion. Sublethally, necrotic or apoptotic cells are shed and can occlude tubular lumen, thus increasing intratubular pressure that along with 'backleak' of filtrate may contribute to dysfunction.

Our group investigated the use of MSC as cell therapy for AKI and documented for the first time that murine (m) MSC, isolated from bone-marrow, contributed to renal repair and recovery from AKI (Morigi et al., 2004). By means of intravenous injection, mMSC isolated from syngeneic male mice ameliorated renal function and tubular injury of female mice with AKI induced by the nephrotoxic anticancer agent cisplatin (Figure 1, 2). 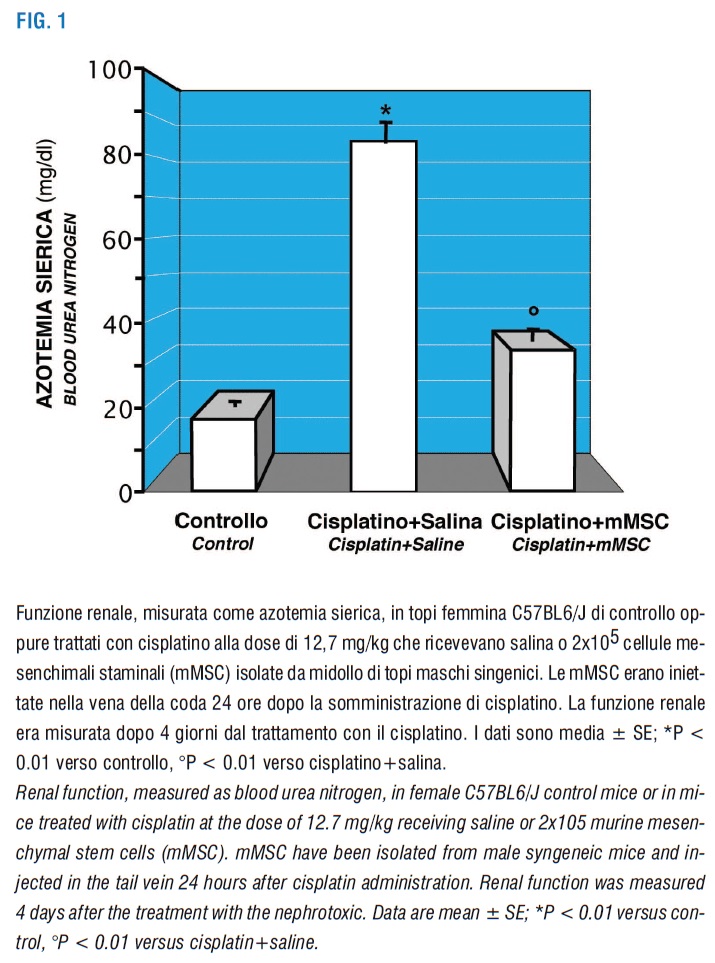 Y-cromosome positive cells were detected in the context of tubular epithelial lining and displayed binding sites for Lens culinaris lectins, thus indicating that mMSC engraft the damaged tubuli and can differentiate into tubular epithelial cells (Morigi et al., 2004). However, at 4 days, the number of mMSC engrafting the kidney was very low (1 mMSC/105 renal cells) (Imberti et al., 2007) and only the 8% of mMSC in the kidney were found inside the tubuli. These data suggest that MSC differentiation into renal cells is an infrequent process and that it can not be responsible alone for beneficial effects. Moreover, this study showed that mMSC significantly accelerated to a remarkable extent tubular cell proliferation, assessed as Ki-67 positive cells, in response to cisplatin damage (Morigi et al., 2004). The protective effect of MSC was also documented by other groups in nephrotoxic or ischemic experimental models of AKI (Herrera et al., 2004; Togel et al., 2005).
These results prove the efficacy of cellular therapy with MSC in the AKI. The beneficial effect is likely due to growth factors supply by MSC that stimulate the regeneration of resident cells. 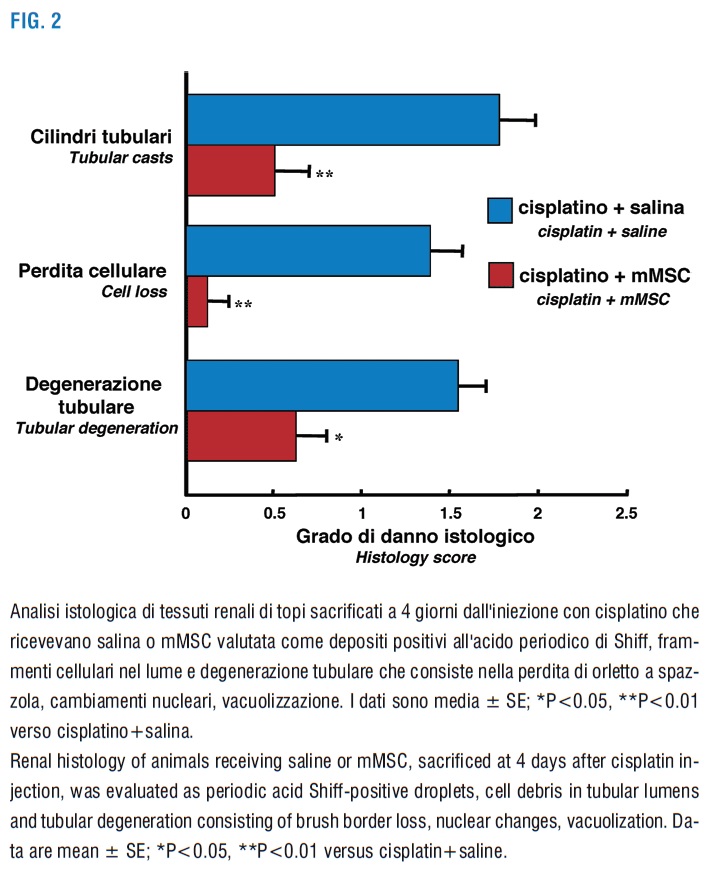 An in vitro model of cisplatin-induced toxicity in proximal tubular cells was instrumental to understand the mechanisms underlying the protection of MSC in the AKI model. mMSC co-cultured with cisplatintreated murine proximal tubular cells (PTEC) induced in PTEC a significant increase of proliferation and reduction of cisplatin-induced apoptosis (Imberti et al., 2007). Tubular cell proliferation was mediated by insulin-like growth factor-1 (IGF- 1), which possesses mitogenic and antiapoptotic properties and is implicated in kidney regeneration in models of AKI (Ding et al., 1993; Miller et al., 1992). IGF-1 is constitutively expressed and secreted by bone marrow-derived MSC. Direct blocking of IGF-1, by specific IGF-1 small interfering RNAs or by specific antibody, confirmed that mMSC-derived IGF-1 mediated the proliferation of cisplatin-damaged tubular cells and, although partially, the inhibition of cisplatin-induced apoptosis on proximal tubular cells. In vivo, we have found confirmation of these evidences (Imberti et al., 2007). Experiments conducted in mice showed that IGF-1 produced by mMSC represents a key mediator in the process of tubular repair in cisplatin induced- AKI. This was based on data that administration of IGF-1 gene-silenced mMSC failed to protect renal function and tubular structure of mice injured with cisplatin (Imberti et al., 2007). Paracrine effect of MSC in the kidney is supported by studies in rats with ischaemia-reperfusion injury showing that the renoprotective action of MSC is due to their ability of producing high levels of growth factors such as VEGF, HGF and IGF-1, and inducing antiapoptotic signals (Togel et al., 2007). The use of IGF-1 as pharmacological approach for the treatment of AKI is controversial. In some experimental studies, IGF-1 administered systemically was found to increase renal blood flow and glomerular filtration rate (Hirschberg et al., 1991), to accelerate the recovery of renal function and to enhance the healing of injured nephrons (Ding et al., 1993; Miller et al., 1992). A more recent report, instead, described that in rats with ischaemia reperfusion injury, IGF-1 treatment enhanced the inflammatory response and was associated to higher risk of death. Likewise, two clinical double blind studies showed that injection of recombinant human IGF-1 did not improve GFR neither accelerated the rate of recovery of renal function in AKI patients with substantial comorbidity (Hirschberg et al., 1999; Hladunewich et al., 2003). It is conceivable that such lack of efficacy is primarily a consequence of limitations to a therapeutic trial imposed by AKI in the intensive care unit setting. Another plausible explanation is that IGF-1 has high affinity for circulating IGF-1 binding proteins, which would affect the delivery of the growth factor to the target organs limiting its effect on renal tubuli. Local supply of IGF-1 to injured tissues may overcome IGF- 1 clearance by binding proteins, as shown by reports in models of ischemic heart failure (Davis et al., 2006; Li et al., 2006). In rats with myocardial infarction, local delivery of IGF-1 with peptide nanofibers increased the survival of cardiac cells injected into the site of damage improving the growth of transplanted cells and the cardiac function. In addition, cardiac restricted over-expression of a transgene encoding an IGF-1 isoform protected myocytes against apoptosis and ventricular dilatation after infarction. Another study highlighted the concept that skeletal muscle-restricted IGF-1 over-expression increased local tissue repair either by acting on resident progenitor cells or mediating the recruitment of bone marrow-derived stem cells to the site of injury in mice after toxin-induced muscle damage. In our setting as well, IGF-1 locally released by mMSC recruited to thesites of tubular damage, might act as a powerful regenerative agent by inducing proliferation and inhibiting apoptosis of endogenous tubular cells. Mesenchymal IGF-1 is instrumental to recruitment of circulating-derived or resident progenitor/stem cells that contribute to the regenerative processes of the kidney.

In the future perspective to use MSC in clinic, we employed MSC obtained from human bone marrow aspirates (provided by Dr. Martino Introna, Laboratorio di Terapia Cellulare e Genica "G.Lanzani", Ospedali Riuniti, Bergamo, Italy), to treat cisplatin-injured immunodeficient NOD-SCID mice. Like the corresponding murine cells, human bone marrow-derived MSC (hMSC) were positively engaged to engraft the kidney and to preserve its tubular integrity and renal function.
Moreover, we reported a clear effect on survival at 7 days after cisplatin of hMSC therapy as compared to AKI mice given saline.
Beneficial effect of hMSC was evident in the renal tissue and manifested in the induced cell proliferation evaluated as nuclear staining of the proliferating cell nuclear antigen (PCNA) (Table) and reduced apoptosis of tubular cells showed by TUNEL assay (Table). In the experimental model of AKI peritubular capillaries were significantly reduced in volume density and diameter. Notably, our data showed, by morphometric analysis of the endothelium specific marker MECA-32, that hMSC treatment completely normalized the endothelium and lumen density as well as the capillary diameters (Figure 3). 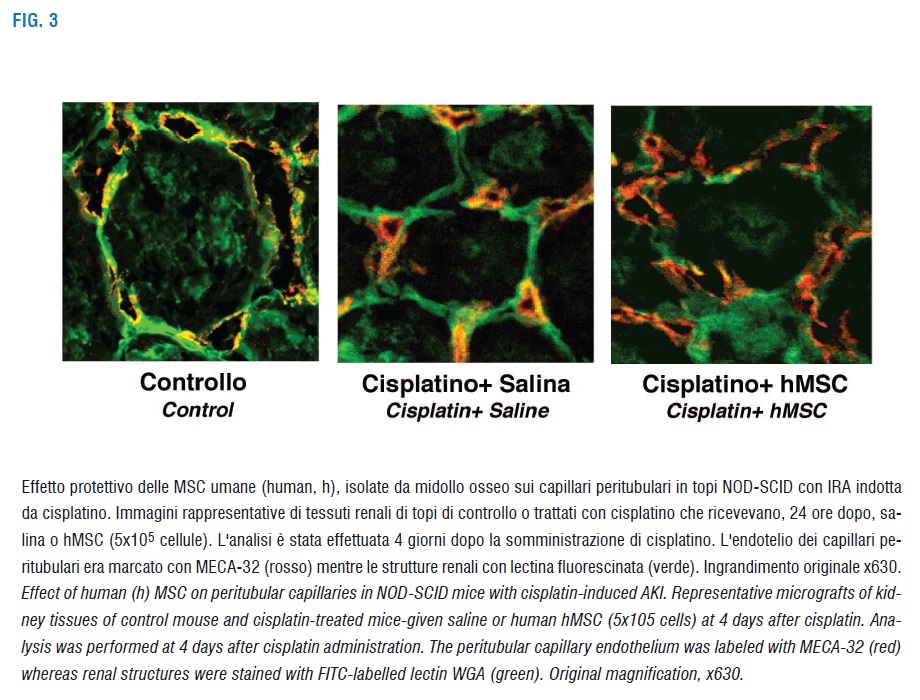 These findings add new intriguing information about the MSC role in kidney recovery from AKI. Amelioration of hemodynamic changes, likely consequence of a more pervious capillary, should yield advantageous effects increasing tissue oxygenation, reducing endothelial cell activation and preserving microvascular integrity. The mechanism involved in MSC-mediated regeneration is summarized in Figure 4 and highlight the potential of MSC as cell population relevant to future cell therapy in patients with AKI. 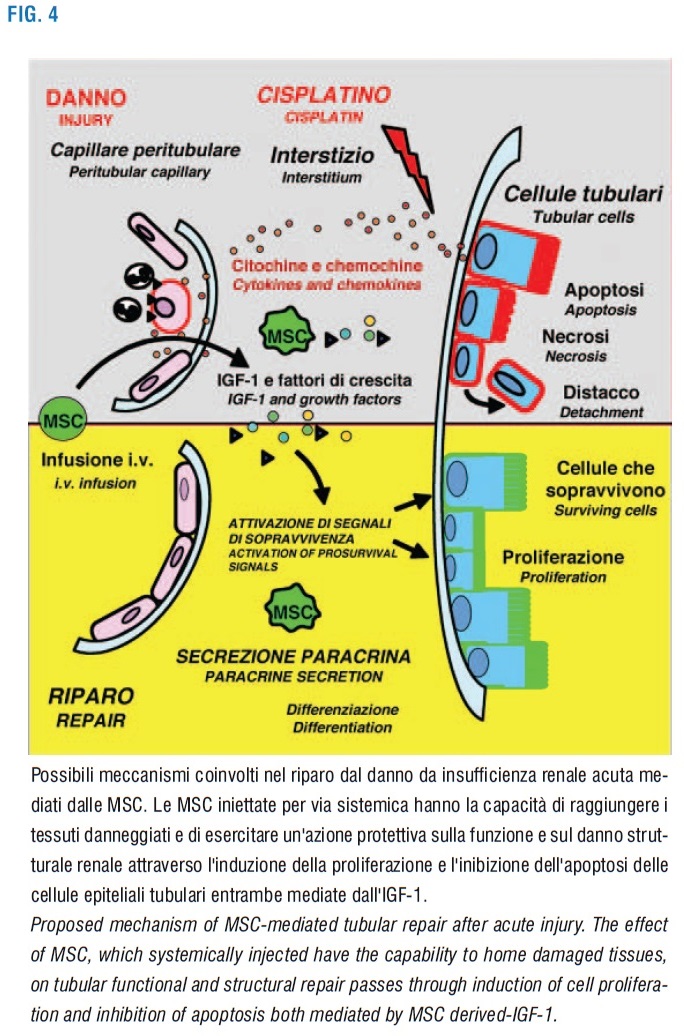 Human bone marrow and CB-derived MSC could potentially represent a valid therapeutic choice in humans. Early clinical evidence documented that these cells are safe and efficacious for the treatment of haematological, neurological disorders and Buerger's disease (Harris, 2008; Kim et al., 2006; Macmillan et al., 2008). Moreover the renotropic and regenerative potential of MSC have been clearly demonstrated and can have an enormous potential for AKI treatment in humans. In the case of MSC from bone marrow, the therapeutic option would rest on allogeneic MSC since the use of the patients' own cells would not be timing feasible. Human bone marrow-MSC or CB-MSC could be in vitro expanded to obtain a suitable cell number prior their administration. The allogeneic source should not raise big immunological concerns since these cells possess immunomodulatory and tolerogenic properties (Hao et al., 1995; Schwinger et al., 1998) that can help to avoid immune rejection in allogeneic environment and could allow cell therapy with a reduced or no host immunosuppression.