Written by Tura A.
Category: Endocrinology

INTRODUCTION
Women with a history of previous gestational diabetes are at risk for later development of Type 2 diabetes [1-3]. The risk is increased when the condition of former gestational diabetes (fGDM) is accompanied by other factors that predispose to diabetes also in different categories of subjects, like improper diet habits, sedentary lifestyle, obesity or weight gain [4, 5]. However, high glycemic levels during pregnancy or after delivery, both at fasting and during an oral glucose tolerance test (OGTT), probably remain the strongest predictors for diabetes development in women with fGDM [6, 7]. Nonetheless, it is not completely clear whether the history of gestational diabetes itself can be an independent risk factor for future diabetes.
To investigate the possible intrinsic abnormalities in women with fGDM independently of confounding factors such as obesity or hyperglycemia, we have selected a group of lean fGDM women with normal OGTT and a matched group of normal women.

FIRST STUDY: METHODS
In a first study, a group of 24 women with fGDM were studied together with 23 control (CNT) women, without any known risk for diabetes and with normal glucose tolerance during pregnancy. All women were Caucasian and studied 4‑6 months after delivery. At the time of the study, all the women had normal glucose tolerance. The fGDM and CNT subjects were group-matched for age, body mass index (BMI), fasting plasma glucose, and plasma glucose at 120 minutes (Table 1).

After an overnight fast, all subjects underwent a standard 75 g OGTT. Venous blood samples for determination of plasma concentration of glucose, insulin and C-peptide were collected before glucose ingestion (fasting sample, t=0) and at 10, 20, 30, 60, 90, 120, 150 and 180 min afterwards.
Areas under the curve of plasma glucose, insulin and C-peptide concentration during the OGTT (AUCG, AUCI, AUCCP, respectively) were computed by trapezoidal integration. Insulin sensitivity was calculated from the OGTT with the oral glucose insulin sensitivity index (OGIS) [8].
Mathematical modelling was exploited to obtain more sophisticated parameters describing the b-cell secretory process [9, 10]. The model describes the relationship between insulin secretion (pmol·min-1·m-2) and glucose concentration and is coupled with a model of C-peptide kinetics [11]. A block diagram of the model is reported in Figure 1. 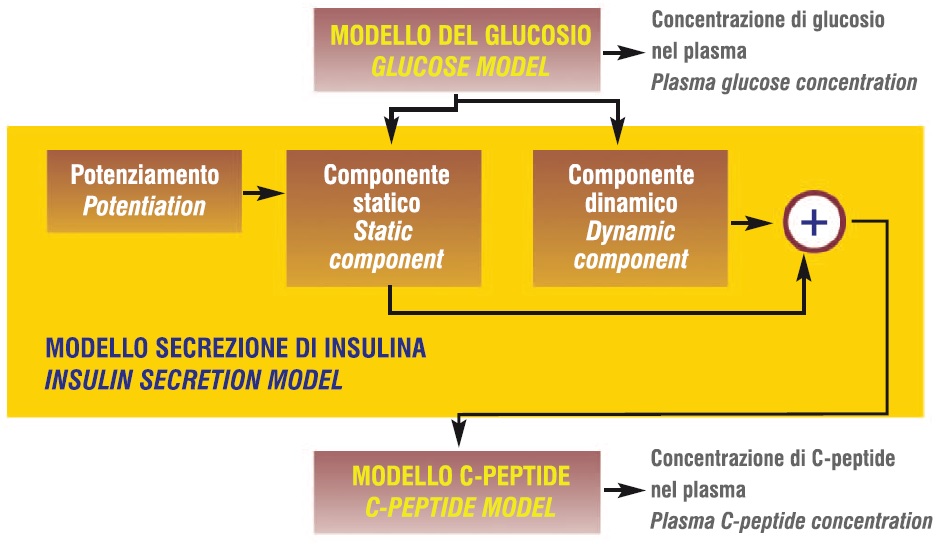 In short, the insulin secretion is the sum of two components; namely, Sg(t) and Sd(t). The first component, Sg(t), represents the dependence of insulin secretion on absolute glucose concentration (G) at any time point, and is characterized by a dose-response function, f(G). The dose-response f(G) is a curvilinear function, although its slope changes only minimally in the observed glucose range (~5-7 mmol/l). The mean value of the dose-response slope is calculated as its integral mean in the 5-7 mmol/l glucose range. This is a b-cell function parameter denoted as glucose sensitivity. The dose-response is modulated by a time-dependent potentiation factor, P(t); thus, Sg(t)=P(t)f(G). A characteristic parameter of P(t) is its mean time, computed as the integral over the OGTT period of the product between time and P(t), divided by the integral of P(t) in the same period [9]. The second insulin secretion component, Sd(t), represents a dynamic dependence of insulin secretion on the rate of change of glucose concentration and is termed derivative component. Sd(t) is proportional to the glucose time derivative (for a positive derivative, otherwise Sd(t)=0); the proportionality constant is termed rate sensitivity.
Data and results are given as mean±SE. Statistical significance of difference in parameter mean value between the groups was assessed with the unpaired t test. Multiple regression analysis was performed among glucose sensitivity, OGIS, and AUCG. P<0.05 was considered statistically significant.

Plasma concentrations of glucose, insulin and C-peptide during the OGTT were not different in fGDM and CNT according to the conventional OGTT analysis, except for plasma glucose at 60 min that was ~1 mmol/l higher in fGDM (P=0.047). As a consequence, AUCs were also very similar (Table 1).
Insulin sensitivity from the OGTT (OGIS) was not different in the two groups (Table 2). 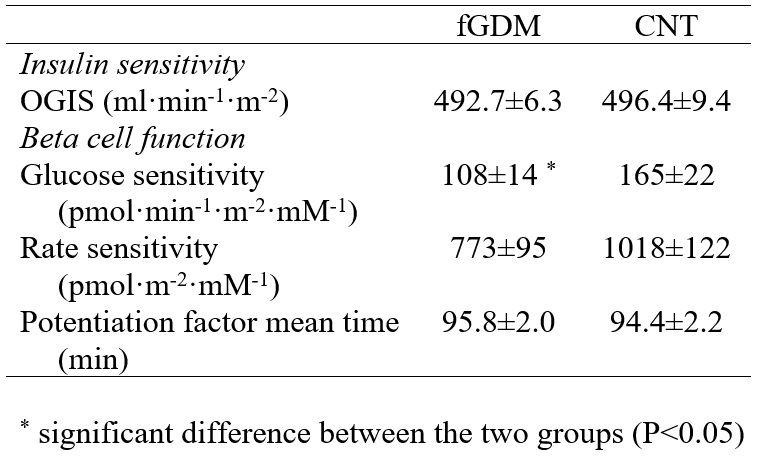 In spite of the narrow range in glucose tolerance, as expressed by AUCG (Table 1), a significant part of this variability in the whole cohort was explained by both insulin sensitivity (OGIS) and glucose sensitivity (R2=0.35, P<0.0001; multiple regression). Thus, both these parameters play a role in determining the variations in AUCG that occur within the range of normal glucose tolerance.

IN PROGRESS STUDY: METHODS
In the new study the group of the normotolerant fGDM subjects was expanded to 82 patients, and the group of CNT subjects was expanded to 38 healthy subjects. These subjects were studied not only through the OGTT, but also through an intravenous glucose tolerance test (IVGTT). Glucose was injected at time 0-0.5 min (300 mg/kg) and insulin (0.03 IU/kg) was infused intravenously at time 20 for 5 min. Venous blood samples for determination of plasma concentration of glucose, insulin and C-peptide were collected at fasting and at 3, 4, 5, 6, 8, 10, 14, 19, 22, 27, 30, 35, 40, 50, 70, 100, 140, 180 minutes after glucose infusion. Insulin sensitivity was estimated by Minimal Model analysis from the IVGTT (parameter SI) [12]. As regards beta cell function, a widely accepted index from the IVGTT is the acute insulin response (AIR) in the first minutes following glucose stimulation [13] which was computed as the suprabasal integral of plasma insulin in the 0-8 minutes interval normalized to the interval length. As regards the OGTT, in this second study we derived another beta cell function parameter from the already presented model. In fact, the value of the dose-response function at a prescribed glucose level can be considered another parameter of beta cell function. Typically, 5 mM glucose level is considered in nondiabetic populations, and the parameter is denoted as ISR5. Furthermore, instead of the potentiation factor mean time, here we considered the ratio of the potentiation factor at 180 to that at zero minutes, which is denoted as PFR. All the other methodological aspects of this second study remained similar to those already described before.

IN PROGRESS STUDY: RESULTS
In this second study, in the CNT group mean glucose was lower than in fGDM in both the OGTT and the IVGTT (Table 3).

In the OGTT, the glucose sample showing the highest difference between fGDM and CNT was again that at 60 min (7.9±0.2 vs. 6.3±0.2 mmol/l, respectively, P<0.0001). Also fasting glycaemia was lower in fGDM than in NGT. Conversely, mean values of insulin and C-peptide during the IVGTT and the OGTT were not different among the two groups (not shown). 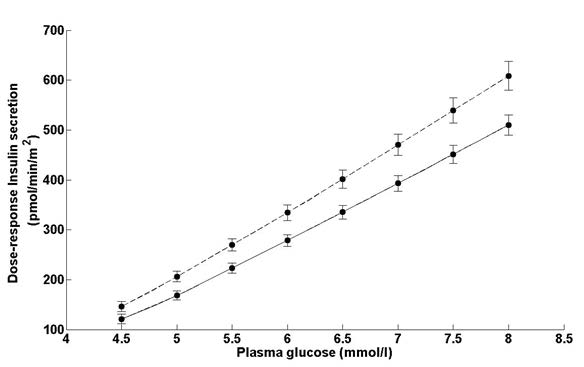 Insulin sensitivity is reported in Table 4. OGIS in CNT was higher than in fGDM. Similar results were found for SI. As regards beta cell function, the acute insulin response from the IVGTT (AIR) was not significantly different in fGDM and CNT (P=0.19). Conversely, glucose sensitivity from the OGTT was already slightly impaired in fGDM compared to CNT (P=0.0407). Furthermore, also ISR5 was lower in fGDM than in CNT (P=0.003). Therefore, the beta cell dose-response was shifted down and rightwards as glucose tolerance worsened (Figure 3). 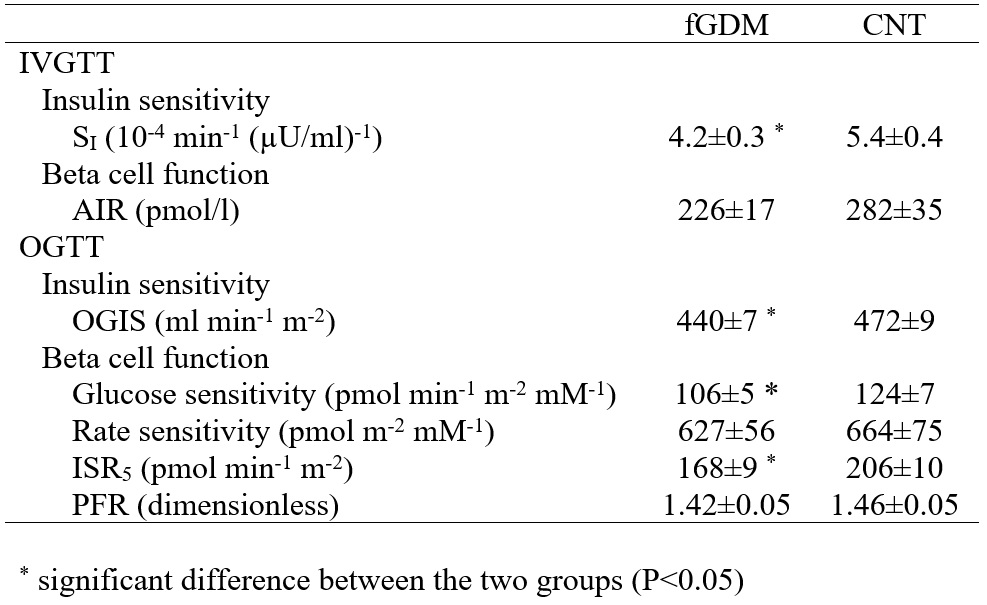 Table 4 Indices of insulin sensitivity and -cell function from both IVGTT and OGTT in former gestational
diabetic (fGDM) and control (CNT) women.