The patentability of living organism between science, law and ethics

The approval on May 1998 of the European Union (EU) directive on the legal protection of biotechnological inventions has aligned Europe to the international trend about the patenting of biotechnologies. Many questions are still unresolved, i.e. the differences between the article 53b of the European Patent Convention (EPC), which prohibits patenting of plants and animal varieties, whereas the directive the directive states that "invention whose object are plants or animals may be patented if the practicability of the invention is not technically confined to a particular plant or animal variety" (article 12).
Again, the interpretation of plants or animal species specificity and that on the threatening  public order and morality (which inhibits patenting) may have doubtful interpretations, according to the different EU States morality  and law (e.g. Denmark does not admit patentability of transgenic animals).
Despite difficulties, biotechnology Research and Development for applications to medicine, veterinary sciences, agriculture and foods is continuously growing.
Bioethical independent evaluations of the applications of biotechnologies and of their side-effects (risk of biodiversity of plants and animals, safety of procedures to save mankind, respect of human dignity and of fundamental human rights, etc.) are mandatory to link interests of science and industrial  productions together with those of mankind. This is the original meaning given by van Potter to the word bioethics, as a bridge to the future.

In 1444, the Council of the Republic of Venice voted (110 against 4) the protection of any improvement of commercial or practical interest.
This is probably the first case of disposition on patenting delivered by a State, thus indicating that also before the industrial revolution of the 18th and 19th centuries the problem of the ingenious inventions' rewarding was appreciated and in need of public regulations, with the aim of guaranteeing both the recognition of the intellectual property and the reward of the investments when an innovation is registered.
We do not know if the Council ruled on this argument in a short period of time. We know that Europe required years to reach a common position on the bio-patenting of the extraordinary scientific and technological innovations of the past decades.
In fact, after more than 10 years of proposals, debates, negative votes and discussions, in the session of May 1998 the European Parliament finally approved a Common Position [Common Position (EC) No. 19/98] on the legal protection of biotechnological inventions. The European Union directive 98/44/CE should now be receipted in the National laws.
The logic of the directive is to distinguish what is the nature (single animal, genomic, etc.), which is unpatentable, and a process of modification or scientific knowledge (to produce animal varieties, to isolate a genomic sequence, etc.) and their products (animal or plant varieties, rDNAs and related proteins, etc.).
Processes and products (as inventions) are patentable.
An exclusion of patentability is made for inventions whic are contrary to "public order and morality".
In effect, the various articles of the EU directive concern both the exclusion principles of patentability and the permissions of patentability:

ii. patentable inventions: inventions which concern plants or animal if the technical feasibility of the invention is not confined  to a particular plant or animal variety (article 4.2), including also a microbiological  or other technical process or a product obtained by means of such a process (article 4.3); an element isolated from the human body or otherwise produced by means of a technical process, including the sequence or partial sequence of a gene, even if the structure  of that element (article 5.2); the industrial application of a sequenced or a partial sequence of a gene (article 5.3).

It should be noted that there is a discrepancy between the directive and the European Patent Convention (EPC), which is the governing rule of the European Patent Office (EPO), Munich, Germany).
Article 53b of the EPC prohibits patenting of plants and animal varieties, whereas the directive states that the "invention whose object are plants or animals may be patented if the praticability of the invention is not technically confined to a particular plant or animal variety" (article 1b ii).
The difference is relevant, because a procedure to produce transgenic animals in various species may be patented according  to the EU directive, whilst being in doubt for the EPO (in fact, the procedure to extend to the EPO the US patent of the onco-mouse presented by Phil Leder, University of Harvard, is to date pending: after a refusal the extension has been approved, but an appeal has been  presented and the procedure is now under the Technical Appeal Board of the EPO).

Legal issues and controversies about the EU directive on biotechnology patenting

Two EU countries (Holland and Italy) have presented an appeal against some aspects of the directive (the problem is the protection of the plants diversity and the natural method of plants' selection-breeding in front of the patentability-introduction-use of transgenic plants). The European Court of Justice (Luxembourg) is examining the appeal.
In any case, three major legal, legal scientific and legal-ethical problems may be highlighted:

Industry representatives would like an approval of a new EPC convention which includes rules to protect the advancements of science and technology, bringing a protection up to the US standards; in second place, they would like to delete article 53b.
However, any new convention requires the approval by the parliaments of all EPC signatory States; this is difficult to obtain, because single States have different positions on crucial points, e.g. the patentability of transgenic animals (1).
This way it is possible to integrate (but not to change) EPC through an "Implementing Regulation", which should be approved by the EPC's governing board: obviously, the Implementing Regulation cannot change essential rules of the original text of the EPC.
Another way to change is the "Diplomatic Conference" between the States which have signed the convention: the long negotiations (3-5 years) and the uncertain outcome underline the difficulties in solving the problem.

The directive 98/44/CE has a simpler text compared to the proposal refused by the EU parliament on March 1, 1995, but the ethical concepts of "suffering inadequate pain" (by animals) and of "threatening public order and morality" (to refuse a single patent procedure) are also in the new text: they are of subjective evaluation and different from one State to another  (e.g. transgenic animals: prohibition in Denmark vs permission in other Countries) or xenotransplantation (e.g. ban/moratorium in Switzerland, permission following appropriate guidelines in Spain, no rules in the other EU States), so that legal proceedings may be expected.
The conflicting case is not the obvious general agreement  on the ban/moratorium of "human cloning", but the problem of cloning a large series of human cells, of xenotransplantation, etc., for which the debate is increasing and the solutions depend on different beliefs (2-4).
Industrial trends
in biotechnology

Where are biotechnologies directed towards? Current investments in drugs' discovery, new therapeutic strategies and high-risk innovative technologies may be analysed under both medical and economic/legal points of view.
The 1996-1998 authorisations for human  medicinal biotechnology products delivered by the European Medicine Evaluation Agency (EMEA, London) have been aimed at three areas (5):

Current strategies of companies may be evaluated in a short period by the analysis of biotechnology medicine in development (Table 1), whereas the medium period tendency may be analysed by the budget for research and development in the last years. 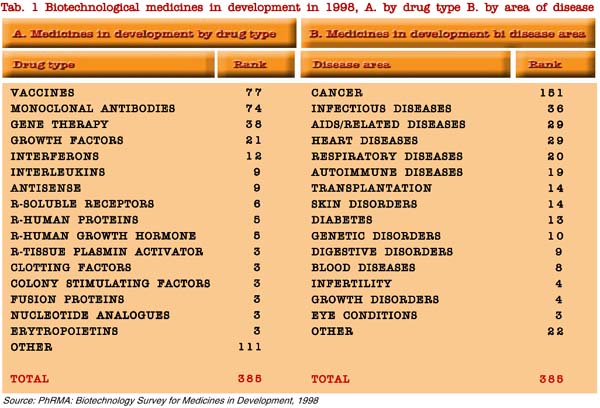 It is worth noting that venture capitals are directed mainly to drug discovery and drug delivery, as well to drugs for the most common diseases, i.e. cancer, cardiovascular, neurological and immune-inflammatory diseases, with a significant rise from 1997 and 1998 for immunity-inflammation, cardiovascular and neurological diseases and agro-veterinary-environment, and a lowering for metabolic drugs and biomaterials. About 50% of the total private investments is concentrated on three areas (drug discovery, cancer, enabling technology) in a total of 20 areas of biotechnology applications (table 2). 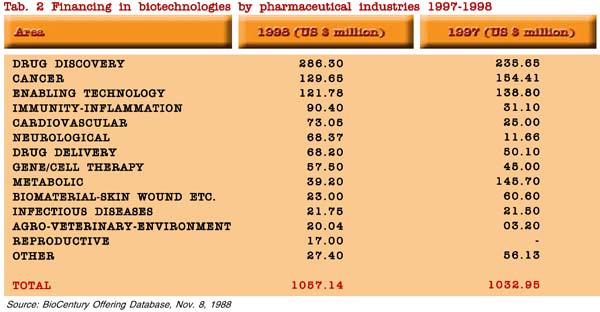 A recent review article on the industrial trends is focused on the technologies to watch, which are estimated for their potential and their difficulties in reaching a clinical application (6).
Considerations are summarised in table 3: it s worth noting that difficulties in the spreading of such technologies are focused  on the validation (combination chemistry, gene therapy, rational drug design), as well on the difficulties of the translation of the experimental models to the human clinical application (signal transduction, immunotherapeutics). 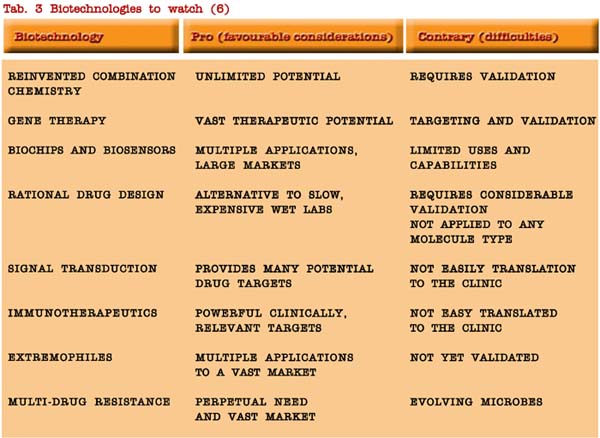 Examples of the use and exploitation of natural resources  are represented by taxans, the anti-cancer  drugs extracted from trees (a diterpene extracted from berries and needles of Taxus brevifolia), or by extremophiles, organisms which are capable of surviving in extreme environments and which are, thus, likely to have evolved molecular mechanisms of potential industrial interest. Countries which are only "donors" of the basic matter form which drug are extracted are (often) cut out from the receipt of any revenue.

Finally, an ambitious drug development platform - called prote(no)mics - attemps to link gene sequence to an expressed phenotype under various physiological or pathological states: when the sequencing of 3-4 billions nucleotides of chromosome-based huma DNA code for 60,000-100,000 genes will be completed, the information should be correlated to the proteic products: the proteome  was defined as the "total protein complement of a genome" (7). This is so far an unexplored field to be addressed in the future of biotechnologies.

Bioethical issues on biotechnologies: the role of both public and private institutions.

Governments and industries both believe that the use of biotechnologies should be evaluated for ethical implications in both health-care and food.
A first observation is that the strategy of industries of industries is obviously oriented  to a large market, i.e. the diseases with higher prevalence (see the investments reported in Table 1).

Thus, a legislation on so-called orphan drugs (drugs for diseases defined according to a prevalence) has been implemented in the US since 1983 (prevalence set up at 7.5 sick persons per 10,000) and in Japan 1993 (prevalence set at 4.0 sick persons per 10,000). Finally in June 1998 the European Commission presented a proposal to the EU parliament to introduce an organ drug legislation in Europe, with a prevalence of the diseases set at 5.0 sick persons per 10,000 (9).
At the same time, the genomics revolution in agricultural biotechnology suggests considering their environmental release as a problem which has been recently considered by the EU Parliament, which has adopted amendments to directive 90/220/EC (10).
The EU Commission and Parliaments agree that any biotechnological application requires an evaluation by an ad hoc Committee.

The US Government, Senate, House and US Public Health Service (PHS) agencies - including the FDA, NIH and CDC - enquire into public opinion  and state guide-lines with regard to emerging problems, such as the appropriateness of the human embryo research (1999: http://www.senato.gov ), public opinion about xenotransplantation [more than three-quarters of the US public considers xenotransplantation positive "if the organ was not available from a human" (11, 12)] and safety of xenotransplantations from primates or not primates  to humans (NIH 1999 guide-lines) or the ethical implications  of human stem cell research (meetings about ethics of Stem Cell Research organised by the US National Bioethics Advisory Commission-NBAC, the results of which are available on http://bioethics.gov/cgibin/bioeth-counter.p. NBAC members have been appointed by the President  of the US to advise the government on bioethical issues.

EuropaBio, the European biotechnology-industry organisation (Brussels), established  an eight-member independent Advisory Group on Ethics  covering more fields  (ethics, law, medicine, veterinary science and health) and published an ethics guide useful in health care and food production ( http://www-bio.be/publications/pg001.html ).
It is clear that a balance between scientific  and technological innovations, industrial applications and respect of the human and animal-plant dignity and mankind is the future of biotechnology development in medicine, as well as in veterinary sciences  and food research.